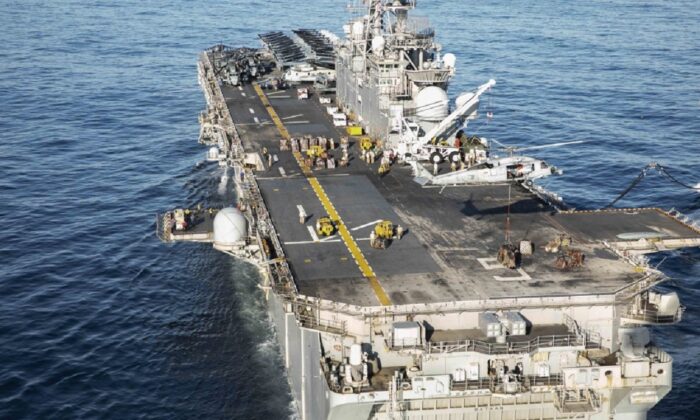 USS Bataan Heads Towards Middle East Amid Tensions With Iran

The USS Bataan was heading closer to the Middle East amid tensions with Iran, the U.S. Naval Institute’s news service said.

The Wasp-class amphibious assault ship is based in Norfolk, Virginia. It was scheduled to take part in military exercises with Morocco but those were scrapped, prompting the redirection to the Middle East.

The 26th Marine Expeditionary Unit, consisting of about 2,200 Marines and which was also slated to train with Morocco, was also moving closer to the Middle East, a defense official told the institute’s news agency.

“For operational security reasons, we do not discuss future operations. ARGMEUs operate continuously across the globe to provide commanders with a forward-deployed, flexible, and responsive sea-based Marine Air-Ground Task Force.”

The Marines would be joining soldiers from 82nd Airborne who deployed to Iraq shortly after a U.S. airstrike took out Iranian General Qassem Soleimani.

According to a tracker published by the Naval Institute’s news service on Jan. 6, the USS Bataan was in the Mediterranean Sea. According to the Navy, the Bataan completed its first Surface Warfare Advanced Tactical Training in August 2019, helping transition from single ship operations to multi-ship operations. In November 2019, the ship completed a live-fire exercise.

Iran-backed militias killed a U.S. contractor last month, prompting U.S. airstrikes on one of the militias. The proxies then attacked the U.S. Embassy in Baghdad, prompting the strike that took out Soleimani and others.

Trump and Iranian leaders both said after the missiles were launched that they prefer to seek a non-violent resolution to the situation. Trump said he hopes to get support from U.S. allies in negotiating a fresh nuclear deal with Iran and told Iranian leaders he hopes to see the country prosper and tap its untapped potential.

Still, Trump said that the punishment for the attack would be “powerful sanctions.”

“These sanctions will remain until Iran changes its behavior,” he said.

Iran appears to be “standing down,” Trump said. He stressed that the United States would not allow Tehran to procure a nuclear weapon.

According to Military.com, the United States had about 60,000 military personnel in the Middle East at the start of 2019, a force that was bolstered by thousands of troops recently deployed to the region. The Defense Intelligence Agency said in a report late last year that Iran’s military has about 420,000 forces, not including about 190,000 in the Islamic Revolutionary Guards Corps. Soleimani was the head of the Corps Quds Forces.