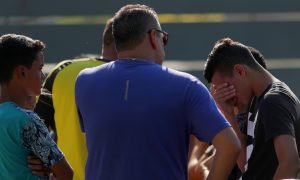 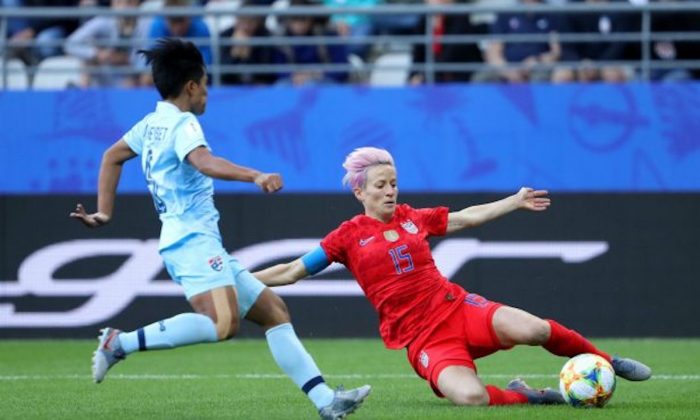 A top player on the U.S. women’s soccer team ignored the national anthem before the team’s game against Thailand on June 11.

Megan Rapinoe, captain of the team, did not kneel during the anthem but stood silently without singing the song and without putting her hand over her heart, according to pictures published by the Daily Mail.

Rapinoe presented a contrast with her teammates, who placed their hands over their hearts and sang the anthem.

Rapinoe previously made headlines after becoming the first white athlete to kneel during the anthem in 2016 after NFL quarterback Colin Kaepernick started kneeling during the anthem as a protest against alleged racism by law enforcement against black people.

After we all looked back last week on the incredible sacrifices and loss of life suffered on D-Day and remembered the American heroes who made victory possible while marking the 75th Anniversary— the timing of this move seems incredibly callous.

Megan Rapinoe is not in the starting XI tonight, but does indeed still kneel on the ground. pic.twitter.com/8ad7FuULRQ

After she knelt a second time, U.S. soccer said in a statement that kneeling was not an option in the future.

“Representing your country is a privilege and honor for any player or coach that is associated with U.S. Soccer’s National Teams. Therefore, our national anthem has particular significance for U.S. Soccer. In front of national and often global audiences, the playing of our national anthem is an opportunity for our Men’s and Women’s National Team players and coaches to reflect upon the liberties and freedom we all appreciate in this country,” it stated.

“As part of the privilege to represent your country, we have an expectation that our players and coaches will stand and honor our flag while the national anthem is played.”

Rapinoe told ESPN that she was following her heart and doing “what I knew was right all along.”

“We need to look at all the things the flag and the anthem represent and all the things it means, and is it protecting everybody?” Rapinoe said. “There are people who don’t feel as protected as I do every day.”

Rapinoe stopped kneeling but she told Yahoo last month that she would not sing during the anthem.

Among those questioning Rapinoe’s methods of protest is her mother, Denise, who told Yahoo that when she and her husband first learned of the kneeling, “it was kind of shocking for us” and “we were pretty upset about that.”

“She’s very patriotic. We’re a very patriotic family. Her dad was drafted during the Vietnam War. … Her grandfather, who lives with us, he’s 94, World War II vet. My father, Korean War, suffered many injuries. I mean, we have a long family history of service to the country,” the mother added. “I just said, ‘Couldn’t there have been another vehicle?’ That’s how I felt. To [Megan], there wasn’t another one at that point. She doesn’t regret it. But there’s been a lot of backlash.”