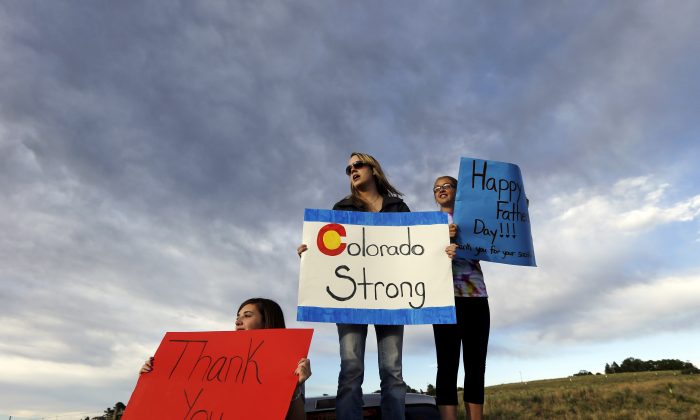 Black Forest resident Kristin Brown, left, who's family lost their home in the wildfire, is joined by Ashley Clipp, Kaitlyn Barlow and Ashley's son Jackson, 2, as they support first responders outside of a fire camp in Colorado Springs, Colo., Sunday, June 16, 2013. (AP Photo/Marcio Jose Sanchez)
US

Many of the wildfires that were raging across the southwest and western United States have been almost or fully contained, including the Black Forest Fire, the most destructive fire in Colorado history.

That fire is now 75 percent contained but it destroyed more than 480 structures, killed two people, and forced over 40,000 to evacuate. The cost of the damages from the fire–which blazed up to 15,000 acres–has reached $5.5 million, according to Rich Harvey, incident commander for the fire response.

While local officials work on completely containing the fire, which burned near Colorado Springs, so that more and more residents can return to their homes, crews in other states worked on other fires, though none have been as destructive as the Black Forest fire.

In California, fire crews have nearly reached 50 percent containment of the 3,520 acre Hathaway fire that broke out in the San Bernardino National Forest last week. In New Mexico, the Tres Lagunas and Thompson Ridge fires have been nearly fully contained, though the 22,500 acre Silver Fire in the Gila National Forest, which forced people to evacuate the former silver mining town of Kingston, is still only 5 percent contained.

Crews finished off a large fire that burned over 20,000 acres in eastern Oregon over the weekend. In Utah, several smaller fires are being contained by crews.