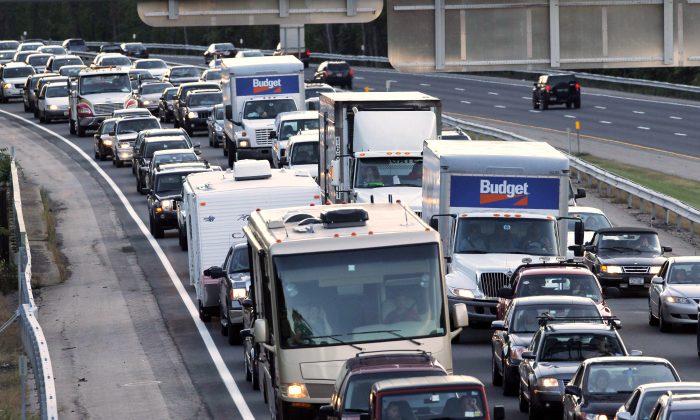 Traffic is backed up on the New York State Thruway in Harriman, N.Y., due to a fatal crash on the northbound side of Interstate 87 in Woodbury on Sept. 18, 2010. (AP Photo/Mike Groll)
US

US Traffic Deaths Rise Sharply After Small Decline in 2014

DETROIT—After declining for most of the past decade, traffic deaths spiked 8 percent in the first half of this year, prompting a call from the nation’s highway safety chief to find ways to reduce the human errors that cause most fatalities.

The new estimate released Tuesday by the National Highway Traffic Safety Administration comes just as millions of Americans prepare to hit the road for the Thanksgiving holiday. AAA predicts that 42 million people will drive 50 miles or more over the coming weekend.

Officials released a final number of fatal crashes for 2014, which showed a decline of 0.1 percent. This year, lower gas prices and an improving economy are prompting people to travel more. Americans drove 1.54 trillion miles in the first half of 2015, up 3.5 percent from the same period in 2014, according to the Federal Highway Administration.

But NHTSA Administrator Mark Rosekind said that not all of the increase could be attributed to people driving more miles. He suspects that texting and other distractions while using smartphones was part of the cause, as well as drunken, drugged and drowsy driving, and increased driving by teenagers. NHTSA, he said, doesn’t have clear enough data yet to pinpoint exact causes.

“These numbers are a wake-up call,” Rosekind said of the increase. He urged people to stop using their phones while driving, not to drink alcohol or use drugs and get behind the wheel, and to wear seat belts and motorcycle helmets.

NHTSA said its research shows that human decisions cause 94 percent of all crashes. The agency plans to hold five meetings around the country early next year to get input on how to cut traffic deaths, followed by a larger meeting in Washington that would yield recommendations to address the human factor.

“It is important for Americans to know that human behaviors are by far the largest cause of fatalities,” Rosekind said.

Rosekind said 2014 statistics show that distracted driving caused about 10 percent of the 32,675 traffic deaths that year. But he said that since driver distraction is difficult to track, “that our numbers underestimated exactly what’s going on out there.”

The slight drop in 2014 traffic deaths came after a decade that saw a 25 percent decline due to fewer miles driven, safer cars and public awareness of the dangers of drunken driving.

For 2014, the rate of fatalities fell to a record low of 1.07 deaths per million vehicle miles traveled. But Rosekind said 2015 estimates showed the death rate rising over 4 percent, which he called “troubling.”

NHTSA’s numbers showed that 2014 was the safest year on record for people inside vehicles, with 21,022 deaths reported. Nearly half of those killed were not wearing seat belts, even though belt use rose to 87 percent, Rosekind said.

Drunken driving continued to cause about one-third of all traffic deaths in 2014, with 9,967 people killed.

The safety agency will hold meetings in February and March in Sacramento, California; Boston; Denver; Atlanta and Dallas-Fort Worth to get input. After that, safety experts will meet in Washington, D.C., to come up with an action plan, Rosekind said.

The plan will focus on human errors or choices that cause crashes, Rosekind said, adding that there is excitement over new technologies that can prevent some of those mistakes.