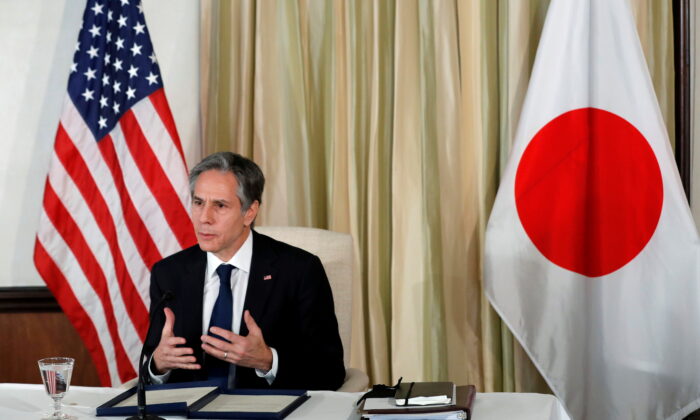 US to Bolster Cooperation With Japan in Semiconductors, Economic Security

The United States and Japan vowed on Friday to bolster cooperation in promoting economic security and building supply chain resilience in response to challenges posed by China and the Russia-Ukraine war.

Top officials from both countries met in Washington for the inaugural “two-plus-two” talks, during which they unveiled a plan to launch a new joint research center for next-generation semiconductors.

Today we co-hosted, together with @SecRaimondo, the inaugural ministerial meeting of the U.S.-Japan Economic Policy Consultative Committee with Japanese Foreign Minister Hayashi Yoshimasa and Minister of Economy, Trade and Industry Hagiuda Koichi at the @StateDept. pic.twitter.com/spNT2X224E

Speaking to reporters, Hagiuda said that “Japan will quickly move to action” on next-generation semiconductors, for which the two allies have agreed to accelerate joint research and development.

The research center would be open to “overseas businesses and research institutes,” including cooperation from other “like-minded countries,” he said.

“Regardless of the size of the country, it should bring benefits to all the countries. This economic [two-plus-two] is, as it were, a compass for realizing a free and open Indo-Pacific,” Hagiuda remarked.

The two countries did not immediately release additional details of their plans, but Japan’s Nikkei Shimbun newspaper said the hub would be set up in Japan by the end of this year to research 2-nanometer semiconductor chips.

The United States is also pursuing semiconductor cooperation with South Korea through the “Chip 4” alliance framework, in which Taiwan and Japan have agreed to participate.

Taiwan now makes the vast majority of semiconductors under 10 nanometers, but there is concern about supply stability if tensions worsen further between Taiwan and China, which views the island as a renegade province.

The two allies also issued a joint statement in which they reaffirmed their commitment to “countering threats to economic security and the rules-based international economic order,” and vowed to make their economies “more competitive and resilient.”

They aim to “deepen discussions and foster cooperation among like-minded partners” while calling on all major economies to adhere to international rules and obligations, according to the statement.

Blinken said the COVID-19 pandemic and the Russia-Ukraine war had shown the vulnerability of critical supply chains, while “a growing number of countries” were struggling with debt burdens due to “unsustainable and non-transparent lending practices.”

“The coercive and retaliatory economic practices of the People’s Republic of China force countries into choices that compromise their security, their intellectual property, their economic independence,” he told reporters.

The United States and Japan pledged to coordinate with other like-minded partners to address “economic coercion, effectively confront non-market policies and practices, and deliver calibrated messaging to the international community.”

“As the world’s first and third largest economies, it is critical that we work together to defend a rules-based international economic order, one in which all countries can participate, compete, and prosper,” Blinken said.

The United States and other nations have previously denounced Beijing for using “debt-trap diplomacy” to lure countries into its Belt and Road Initiative, which was launched by Chinese leader Xi Jinping in 2013 to increase Beijing’s trade networks.