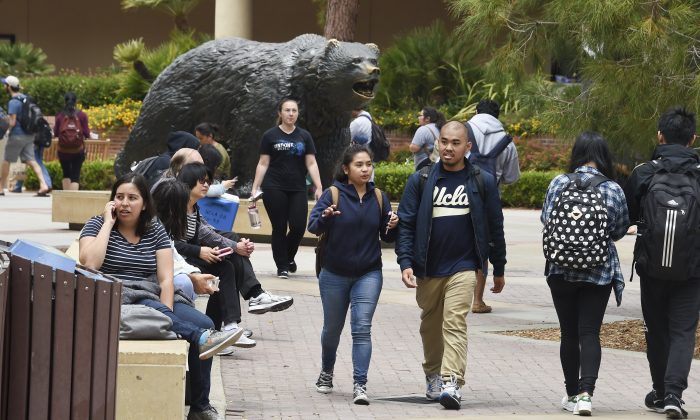 People at the University of California Los Angeles (UCLA) campus in Los Angeles on June 1, 2016. (ROBYN BECK/AFP/Getty Images)
US News

WASHINGTON—The People’s Republic of China and other hostile powers are exploiting the United States’ international student visa policies to conduct industrial and military espionage against U.S. targets, according to a panel discussion at the National Press Club in Washington on Aug. 20.

Temporary visitors to the United States can get visas for 90 days or six months, but foreign students and research scholars can stay six to eight years and operate undisturbed in America’s most open environment—namely, its institutions of higher learning—said Dan Cadman, a fellow at the Center for Immigration Studies (CIS), a nonpartisan think tank.

Hosting foreign students and international scholars can be a good thing for the United States, Cadman said at the event, “but the reality for government security officers is that it creates, as Mao Zedong once said, a sea in which fishes can swim.”

“Although Mao was speaking about guerrillas among the people, it’s equally true that foreign student and exchange scholar populations, by virtue of their size, their diversity, and the openness of the campus environments, act as a perfect place in which people who are engaged in espionage or people who are of malintent can conceal themselves without any real serious possibility that they’re going to be detected at least not until in the fullness of time,” he said.

From 2013 to 2017, there were more than 2 million admissions at ports of entry of nonimmigrant students and exchange scholars, Cadman said, adding that many of these individuals come from countries that are openly hostile to the United States or in fierce competition with it.

Cadman cited the International Institute for Education showing that in the 2017–2018 academic year, there were 363,341 Chinese students, excluding exchange scholars, enrolled in the United States.

Although the vast majority of visiting students and academics are not spies, many governments “seed” their student diasporas here with students sympathetic to their regime’s aims, he said.

“And for the Chinese government espionage is, you might say, a family affair. Everything is geared toward accruing technological advantage, and if that means they can short-circuit the time and money on research by stealing secrets, whether that’s in the defense and military sector, or in the trade secret sector, they’re going to do it.”

In addition to state-directed spies, there are also “spies of opportunity” who come to the United States to study, but once here “fit themselves into niches” so they can obtain “those secrets that they can pass back home.”

“The Chinese spy services are literally threatening Chinese families,” telling families that if their children don’t bring back illicitly obtained intellectual property from the United States, “the family will be put in jeopardy.”

Cadman also said that schools stateside find it hard to resist the extra money that comes with students from abroad, which provides a strong economic incentive to attract those students.

This has a “de facto effect of, over the course of time, squeezing native born citizens out of a lot of positions and this is particularly of concern where STEM—science, technology, engineering, mathematics subjects—are concerned,” he said.