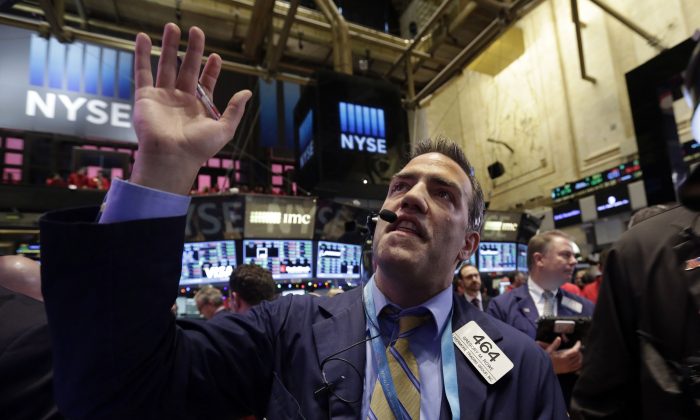 EARNINGS BEAT: Oracle posted better-than-expected results late Wednesday in its first quarterly report since co-founder Larry Ellison gave up the helm of the business software maker. The company reported that its software and cloud revenue grew 5 percent. The stock rose $3.81, or 9.2 percent, to $44.96.

FED SPARK: Stocks are building on a rally that was driven by steadying oil prices and comments from the Federal Reserve Wednesday after its last policy meeting of the year.

Stocks surged after the Fed said that while it was edging closer to raising interest rates from close to zero, it will be “patient” in deciding when to do so. Fed Chair Janet Yellen said she foresaw no rate hike in the first quarter of 2015.

OIL RESUMES SLIDE: After starting the day higher, benchmark U.S. crude resumed its slide by mid-morning. The price of U.S. benchmark oil slumped $2.36, or 4.2 percent, cents, to $54.11 after rising as high as $58.71 in morning trading.

Oil has plunged since June, when it peaked at $107 a barrel. Overproduction and weak demand are behind the fall in global oil prices. Brent crude, a benchmark for international oils used by many U.S. refineries, fell $1.91 to close at $59.27 a barrel in London.

THE QUOTE: “The bottom line is that low oil is a net positive for the consumer,” Karyn Cavanaugh, a senior market strategist at Voya Investment Management. “The consumer drives the U.S. economy, which drives the global economy, so that’s good news.”

METALS: Prices for precious and industrial metals were little changed. Gold edged up 30 cents to $1,194.80 an ounce, silver was essentially unchanged at $15.93 an ounce and copper fell two cents to $2.85 a pound.

BONDS AND CURRENCIES: U.S. government bond prices fell. The yield on the benchmark 10-year government Treasury note, which rises as prices fall, climbed to 2.21 percent from 2.14 percent a day earlier.