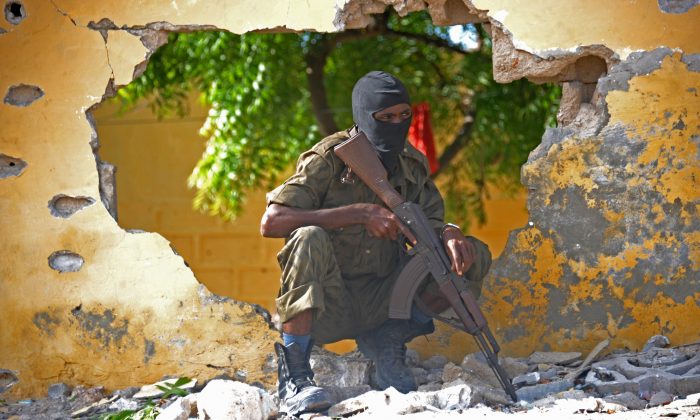 A Somali soldier stands guard next to the site where al-Shabab militants carried out a suicide attack against a military intelligence base in Mogadishu on June 21, 2015. (Mohamed Abdiwahab/AFP/Getty Images)
Africa

MOGADISHU, Somalia—Hoping to capture a high-profile target, Somali forces hopped off helicopters a couple of miles (kilometers) from an al-Shabab-controlled town, slipped through the dark and got into a fierce firefight that reportedly killed more than 10 Islamic extremists, US and Somali officials said.

U.S. forces were serving in an advisory role and provided the helicopter transportation for the mission, said Navy Capt. Jeff Davis, a Pentagon spokesman. The U.S. forces accompanied the Somali troops on the mission, but did not “go all the way to the objective,” he said.

A Somali intelligence official told The Associated Press that the person they wanted to get was apparently killed during the fight.

“It was a high-profile target, and chances of capture were challenged by a stiff resistance by militants guarding the house targeted by the special forces, which forced the commando to resort to the kill or capture method,” the official said. He spoke to AP on condition of anonymity because he was not authorized to speak to the press on the matter.

Another Somali intelligence official provided a similar account to AP. The exact target of the raid, if any, remains unclear.

The spokesman for the U.S. Africa Command, Col. Mark Cheadle, said the U.S. forces got out of the aircraft but “stayed in a safe area to observe the actions on the objective.”

There were no U.S. casualties, Davis said.

More than 10 militants were killed, said other U.S. officials Wednesday who spoke on condition of anonymity to discuss an operation that has not been announced publicly.

Roughly 50 U.S. special operations troops have been operating in Somalia on a rotational basis for the last few years. The raid came only three days after the U.S. carried out an air strike on an al-Shabab training camp that the Pentagon said killed about 150 of its members.

These are some of the most aggressive military actions in Somalia since a U.S. military intervention in the early 1990s during a famine culminated in the so-called Black Hawk Down battle, with heavy U.S. losses.

For its part, al-Shabab said its fighters had foiled the overnight attack on Awdhegle town in southern Somalia, and that the raiders retreated with casualties.

Residents of Awdhegle described bullet-pockmarked walls blackened from explosions after the attack.

“Al-Shabab fighters cordoned off the area in the morning and made arrests of people suspected to be spies, a resident in the town told AP by phone. He refused to be identified, fearing reprisal by militants.

Sheikh Abdiaziz Abu Musab, a spokesman for al-Shabab, told a militant-run online radio that the foreign forces used two helicopters and that one militant was killed.

Mohamed Hassan, an elder in Awdhegle, told The Associated Press that the foreign forces parked their helicopters outside the town and walked at least 3 kilometers (1.9 miles), sneaking into the town to avoid detection by the Islamic fighters and launch a surprise raid.

He said there was gunfire between militants and al-Shabab foot soldiers that started near the police station.

Meanwhile, three police officers and one civilian were killed Wednesday in a suicide car bombing outside a cafe near the police academy in the Somali capital, Mogadishu, said police Gen. Ali Hersi Barre.

There was no claim of responsibility for the blast, but it appeared to be part of attacks waged by al-Shabab, which was ousted from Mogadishu by African Union peacekeepers in 2011.

Somalia President: No Elections in 2016