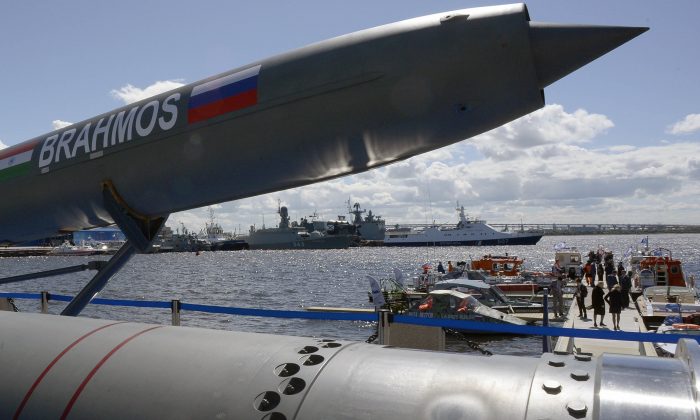 A Brahmos supersonic cruise missile is on display at the International Maritime Defense Show in Saint Petersburg on June 28, 2017. (Olga Maltseva/AFP/Getty Images)
Thinking About China

US Should Provide Philippines With Ballistic Missiles to Defend Against China

Russia is making inroads against democracies and traditional U.S. allies like the Philippines, India, and Turkey, with its supply of cheap but unreliable defense exports.

The latest export win for Moscow came on Jan. 14, when Philippine Defense Secretary Delfin Lorenzana communicated that Manila approved an acquisition of the BrahMos supersonic missile system from an Indian-Russian joint venture.

The BrahMos land-based PJ-10 cruise missile, which will be used by the Philippine Marines in an anti-ship capacity, is being sold by the group for just $375 million. The Philippines will acquire three batteries of missiles, consisting in total of six missile launchers, three radars, and three command and control centers. Each road-mobile launcher has three missile tubes.

The Philippine purchase is at least partly positive as a departure from Manila’s deepening relationship with Beijing. But the U.S. pullback from the Philippines that started in the early 1990s has opened the country for exploitation by both Russia and China.

“The Philippines essentially defected to Beijing a few years ago, but the free world can always trust Chinese leaders to poison new friendships,” noted Gordon G. Chang in an emailed comment on the BrahMos purchase.

Rick Fisher, a senior fellow at the International Assessment and Strategy Center, responded in an email about the purchase, “America’s decision to end its active military presence in the Philippines will be viewed historically as one of its greatest mistakes that paved the way to global hegemony under the Chinese Communist Party.”

He said that “China not only was actively involved in helping Philippine Senators to decide not to approve a new treaty for the continued U.S. presence, China was ready to exploit the power vacuum that resulted from the U.S. withdrawal.”

Fisher said that the American decision “proved to the CCP that American leaders did not have determination to win over the long term, that China could use many stratagems to weaken the United States well before [Beijing] achieved nuclear and conventional military superiority.”

The BrahMos Agreement and Moscow

The recent agreement to acquire BrahMos missiles was signed in March, when 200 Chinese maritime militia boats anchored in the Philippine exclusive economic zone (EEZ) and refused to leave for months. Chinese fishing boats continuously steal fish in Philippine waters, with little resistance from the U.S. and Philippine governments. Beijing has sought to compromise both governments through million-dollar business deals, targeting the families and associates of the Philippine and American presidents, as well as the congressional leadership in both capitals.

Beijing exerts influence over not only Manila and Washington, but Moscow as well, due to China’s massive imports of Russian oil and gas and far larger economy. Therefore, India and the Philippines’ purchase of Russian systems could be built on a foundation of sand.

Russia might have designed malfunction or a kill switch into its exported defense systems. In an emergency, Russia might stop the supply of critical weapons components and spare parts. It is difficult for India, the Philippines, and other nations that buy cheap Russian military hardware to know whether it is truly reliable. This trust deficit with Moscow puts the users of Russian systems, including countries’ heads of state and diplomats, at a disadvantage in their negotiations with Beijing.

Even if the BrahMos missiles work perfectly, they are not enough. There are two major vulnerabilities in the Philippine defense of its West Philippines Sea. First, even after the purchase, China can occupy features, build artificial islands, fish, and drill for oil and gas outside the range of the missiles but within the at-minimum 200 nautical mile (nm) EEZ of the Philippines. The missiles have a speed of Mach 2.8, but a range of just 156 nm, according to an Indian official quoted in the Wall Street Journal.

The BrahMos can launch from ships, as was proven in a test by India’s Ministry of Defense on Jan. 11. But the missiles bound for the Philippines will only be shore-based.

The international arbitral tribunal in the Hague validated most of the Philippines’ EEZ, but wrongly shared fishing rights over the shoal with Chinese fishers, increasing confusion and giving Beijing an excuse to militarize what has historically been an almost exclusively Philippine fishing ground.

To protect the Philippine EEZ, and avoid problems between democracies and U.S. alliance members in the future, the United States and Europe should offer for export a new line of military hardware that is reliable, yet inexpensive enough to compete and win in bidding wars against cheap Russian and Chinese defense exports. If necessary, the U.S. and European exports should be subsidized in order to improve the coherence of Western alliance systems.

Such inexpensive U.S. and allied defense exports could completely drive out unreliable Russian systems that risk disaggregating U.S. alliance systems and turning them into satellites of Moscow, or worse, Beijing.

Fisher wrote that an effective deterrent against China could be created with a new Philippine president and prodigious numbers of short- and medium-range ballistic missiles.

“Washington could base or gift to Manila a force of two hundred 500km range PrSM short range ballistic missiles and 100 or so 1,500 to 2,000km range Typhon medium range ballistic missiles, both soon to begin production,” wrote Fisher. “These would be enough to put Chinese bases in the [Spratlys] out of commission and pose a deadly threat to China’s nuclear submarines and aircraft [carrier] bases at Hainan.”

Without effective U.S.-Philippine military cooperation, continued Fisher, “the Philippines may be neutralized for generations to come, a major Chinese goal as it fights for hegemony in Asia and then globally.”

Chang agrees, and argues that the United States, India, and the Philippines should grow closer. He believes that “The growing cooperation among China’s victims means Xi Jinping cannot accomplish his regime’s historic goals.”

Xi, according to Chang, “has squandered good will and built an anti-Beijing coalition. He can no longer intimidate. Manila is not just buying a missile; it is entering a powerful pact.”