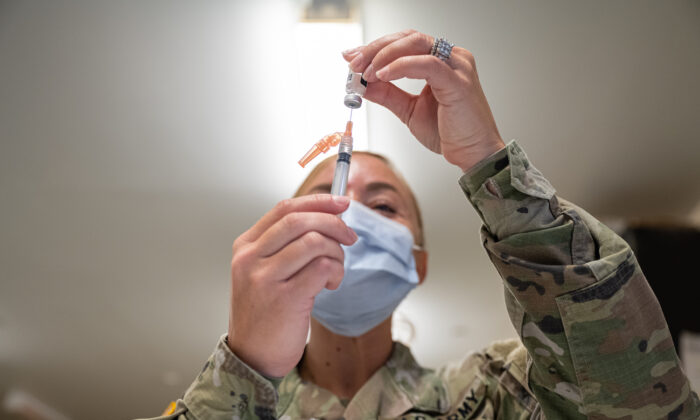 A technician fills a syringe with a Janssen COVID-19 vaccine in Fort Knox, Kentucky, on Sept. 9, 2021. (Jon Cherry/Getty Images)
By Katabella Roberts

Two U.S. service members have filed a lawsuit against Defense Secretary Lloyd Austin to bring an end to his requirement that all troops must receive a COVID-19 vaccine.

As part of that, they have called for exemptions based on natural immunity.

The filing names Austin as a defendant alongside Secretary of Health and Human Services, Xavier Becerra, and Janet Woodcock, acting commissioner of the Food and Drug Administration (FDA).

Both the service members are filing the lawsuit on behalf of themselves and other active duty service members—including those that have survived COVID-19—who have been mandated to have the vaccine.

As per the lawsuit, Robert and Mulvihill claim that Austin had publicly notified them via a memo that they are to be immediately vaccinated and that the Department of Defense (DoD) are “already vaccinating military members in open violation of their legal obligations and the rights of service members under federal law and the constitution.”

Roberts and Mulvihill also based their argument on the Pfizer-BioNTech vaccine’s previous emergency-use authorization standing, noting that “Federal Statutes prohibit the use of any unlicensed vaccines whatsoever on service members without their informed consent.”

The plaintiffs are seeking declaratory and injunctive relief because the DoD is “using an Emergency Use Authorization COVID-19 vaccine.”

Pfizer-BioNTech received full FDA approval on Aug. 23, days after the lawsuit was filed.

The service members also want to create a medical exemption—based on evidence submitted through serologic tests, documented infection, or similar circumstances—for those who were previously infected with the virus and have survived because they have “natural immunity.”

“Therefore any involuntary vaccination of plaintiffs is a direct violation of federal law, attendant regulations, and the U.S. constitution, denying plaintiffs Equal Protection laws under the 14th Amendment by treating plaintiffs with natural immunity differently that their similarly situated peers in the military who have only simulated immunity, and violating their bodies with an experimental vaccine.”

Earlier this month, the Pentagon said it has a “range of tools” to compel military service members to get the COVID-19 vaccine but noted that those who refuse to get vaccinated may not necessarily face dishonorable discharge.

Speaking at a press briefing, Pentagon Press Secretary John F. Kirby told reporters that it was important for service members to “understand the ramifications of their decision” should they choose not to have the vaccine.

“When an individual declines to take a mandatory vaccine, they will be given an opportunity to talk to both medical providers as well as their own chain of command so that they can fully understand the decision that they are making,” Kirby said.

“And the other thing I’d say is that our commanders have a range of tools available to them short of using the Uniform Code of Military Justice to again try to get men and women in the department to make the right decision here,” he added.