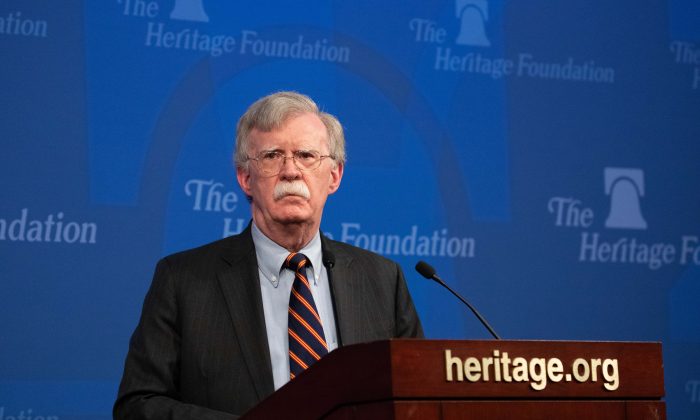 The U.S. administration unveiled a new investment strategy in the African continent on Dec. 13 as part of efforts to counter China’s growing influence among African nations.

China has sought to boost its geopolitical influence in the region by funding infrastructure projects via the One Belt, One Road initiative, and providing aid in exchange for mining rights to natural resource deposits.

But critics have observed that China’s investments have indebted impoverished countries and bred local corruption—all in the name of fulfilling the Chinese regime’s national interests.

In his speech, Bolton called out China’s pattern of “bribes, opaque agreements, and the strategic use of debt to hold states in Africa captive to Beijing’s wishes and demands.”

As examples, he mentioned the case of Djibouti, which owes most of its public debt to China.

China also established its first overseas military base there, miles away from the U.S. base Camp Lemonnier, which supports U.S. forces that carry out anti-terror operations.

China’s economic deals have swayed Djibouti into considering handing over control of the Doraleh Container Terminal, a strategically-located shipping port on the Red Sea, to Chinese state-owned firms. This year, the Djibouti government abruptly ended a contract with the Dubai-based port operator that ran the container terminal, then nationalized shares held by a Djibouti company—effectively giving the government control. This led to concerns that the government would feel pressured to compromise its sovereignty to Beijing.

“Should this occur, the balance of power in the Horn of Africa—a major artery of maritime trade between Europe, the Middle East, and South Asia—would shift in favor of China,” Bolton warned.

Zambia is also heavily indebted to China. Its national power utility company, ZESCO, is set to be acquired by Chinese entities following Zambia’s failure to pay back loans owed to China, African media reported in September.

The Chinese regime has made significant One Belt, One Road investments there so that it could trade heavily in rosewood—a highly coveted material for making Chinese furniture.

But experts have expressed concerns that Chinese demand is fueling illegal logging and decimating forests in the African country.

Bolton named China and Russia as threats to U.S. national security because they are “deliberately and aggressively targeting their investments in the region to gain a competitive advantage over the United States,” but gave more examples about China.

The Epoch Times has previously reported on Beijing’s investments in Sierra Leone, which put the country in financial distress. The Chinese regime also tried to influence local politics in order to elect members of a political party that supported business deals that gave Chinese firms ownership of iron, bauxite, and gold mines.

China has similarly signed deals in Ghana to gain control of mineral deposits, which has local officials and residents worried about environmental damage.

The new U.S. strategy will expand markets for U.S. exports while promoting economic growth in Africa and engaging with African governments as “strategic partners,” Bolton said.