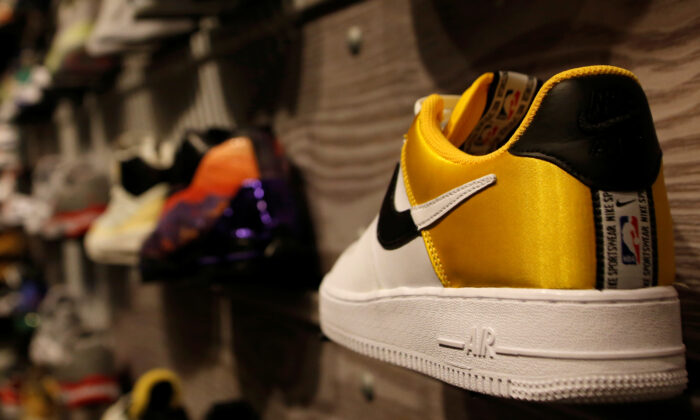 A pair of Nike's Air Force shoes with an NBA logo is displayed at a Nike store in Beijing, China, on Oct. 10, 2019. (Tingshu Wang/Reuters)
China Business & Economy

US Retailers Falter in China Amid Lockdowns, Weak Economy, Nationalism

U.S. retailers in China have been hit hard by COVID-19 lockdowns, a weakening economy, and increased nationalism.

Amazon Kindle is exiting the China market, as are Airbnb and Yahoo. Fifty-three percent of companies responding to a U.S. Chamber of Commerce survey said they would decrease their China exposure if COVID lockdowns persist.

The chamber’s president, Michael Hart, predicted that American and foreign investment in China will decline over the next few years because foreigners are finding it difficult to enter China and inspect the companies and the economy they would be investing in. Meanwhile, current lockdowns and the threat of future lockdowns are only one of many factors affecting foreign retailers in China.

In a survey taken in early June, the U.S. Chamber of Commerce found that only 31 percent of respondents said that they were back to normal operations despite the lifting of major lockdowns in Shanghai. The vast majority reported that their capacity was well below normal because of continued restrictions. Additionally, only 55 percent of Chinese companies that suspended operations were back to business as usual.

In May, lockdowns in Shanghai resulted in a 28 percent decline in industrial output. However, Shanghai is not the only city to experience a decrease in production. Beijing’s industrial output declined by nearly 40 percent even without undergoing major lockdowns.

During the same period, retail sales in Beijing decreased by 26 percent. Fixed-asset investment growth in Beijing slowed to 2.8 percent from January to May, which is well below the national average of 6.2 percent.

This data suggests that the lockdowns are not responsible for China’s economic woes. The problems plaguing Beijing will also dampen the economic recovery of Shanghai and the rest of the country.

Factories in China’s Pearl River Delta are increasing layoffs due to supply chain disruptions, plummeting demand, and a shift of manufacturing orders to Southeast Asia.

Unemployment across China’s largest cities hit 6.7 percent in April, which was higher than when lockdowns were more widespread in 2020. The job market for young people looks particularly grim as youth unemployment hit 18.4 percent in May. An additional 10.7 million university graduates will enter the labor market, and the youth jobless rate is expected to increase to 23 percent in July and August.

Much of the pressure on the job market comes from the Chinese Communist Party’s (CCP) clampdown on the three most popular sectors for young people to find jobs in: property, technology, and education.

Meanwhile, uncertainty about the economy has left Chinese consumers cautious. Retail sales slipped by 11.1 percent in April and an additional 6.7 percent in May. The catering industry was down 21.1 percent in May compared to 2021.

On June 14, the CCP warned that it was trying to contain a COVID outbreak to avoid a lockdown in Beijing. Rather than reassuring the public, this suggests that the regime is considering additional lockdowns, which has caused consumers to curb their spending even more.

Some retailers are reporting a decline in foot traffic of 50 percent, with the percentage of browsers who make purchases down by 30 percent. The results of China’s three-week-long “618″ shopping festival—one of the biggest retail days of the year—suggest a shift among Chinese consumers toward greater value. People are adding products to their online shopping carts long in advance and waiting until they go on sale to buy them. Although the total sales during the festival this year may come in higher than last year, it seems that sales volumes were shifted from previous months.

Luxury brands are also in decline. In 2021, China accounted for 21 percent of the world’s luxury brand market, but the fashion trail is ending. In May this year, companies such as Burberry reported that 40 percent of their retail network was shut down, and online deliveries were nearly impossible.

Luxury brands have been hit by Chinese leader Xi Jinping’s “common prosperity” policies, which are now transforming luxury brands from a status symbol to a symbol of inequality. Brands such as LVMH Moët Hennessy Louis Vuitton and Gucci have seen their sales decline 30 percent to 40 percent during the first quarter of 2022. As a result, foreign luxury brands in China have revised their growth projections for 2022 from 18 percent down to 3 percent.

Xi’s push for increased nationalism also takes market share away from American brands. Over the past several years, Marvel films have been some of the highest grossing. In 2021, not a single movie with a Marvel character was approved for a China release. In contrast, the 2022 patriotic Chinese film “The Battle at Lake Changjin” became the highest-grossing movie of all time in China.

In a 2020 survey, 85 percent of Chinese respondents said they would buy a local brand over a foreign one—this is a sharp increase from 2016 when it was 60 percent. As nationalism grows among young people, Generation Z sees “Made in China” as a mark of pride, and foreign companies will have to find new ways to attract customers.

Once popular foreign brands, such as Hennes & Mauritz AB (or H&M Group) and Nike, have fallen out of favor with Generation Z, particularly after the companies released statements about the CCP’s use of slave labor in Xinjiang.

Between 2018 and 2020, the top two sneaker makers in China were Nike and Adidas, with a combined market share of 50 percent. By the end of January 2022, Chinese brands Anta Sports Products and Li Ning gained 12 percentage points, capturing a total of 28 percent of total sneaker sales. On the other hand, foreign brands have seen a decline of 24 percent. Previously, Nike earned 22 percent of total revenues in China; now, that figure has dropped to 16 percent.