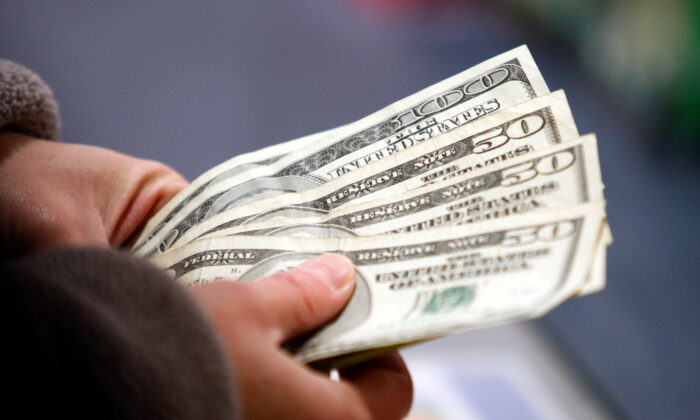 File photo showing a customer counting money at the register of a store in Manchester, N.H., on Nov. 22, 2012. (Jessica Rinaldi/Reuters)
Business & Economy

US Retail Sales Tick Up in January, Suggesting Consumer Strength

'While the US consumer is still strong, there are pockets of weakness in spending'
By Tom Ozimek

In January, overall retail sales, which reflect buying at physical stores and online, rose by 0.3 percent month-to-month, the Commerce Department said Friday. The figures are adjusted to smooth out seasonal fluctuations.

Retail spending by consumers for the year between Jan. 2019 and Jan. 2020 grew by a seasonally adjusted 4.4 percent, suggesting the economy has continued to be buoyed by a confident public.

“Consumer spending is the pillar on which the U.S. economy rests,” McBride added.

According to the Fed’s Personal Consumption Expenditure (PCE) data, American consumers injected some $13.4 trillion into the current-dollar GDP of $21.43 trillion in 2019, by this measure contributing around 63 percent to U.S. economic output.

Still, consumer spending in certain sectors of the economy experienced a drop in January, with sales at clothing stores suffering their biggest month-over-month fall since 2009, declining by 3.1 percent, the Commerce data shows.

Another pullback was December data that was revised down to show that so-called core retail sales—which exclude certain products—rose by 0.2 percent instead of by 0.5 percent, as had been previously reported.

“Overall, the numbers show that while the U.S. consumer is still strong, there are pockets of weakness in spending,” said Robert R. Johnson, Professor of Finance at Heider College of Business, Creighton University, in an emailed statement to The Epoch Times.

“If one removes automobiles, gasoline, building materials, and food services, retail sales were unchanged from December,” Johnson added. “The numbers provide something for both economic bears and economic bulls to build their case.”

“The U.S. consumer seems to be holding up,” said Allen Sukholitsky, Founder & Chief Macro Strategist at Xallarap Advisory, in an emailed statement.

“Retail sales came in slightly below our expectations, but we are not reading too much into this because last month they came out significantly better than we had expected. One month does not make a trend,” he added.

“When that virtuous cycle starts to show cracks—such as rising unemployment that undercuts the ability and confidence of households to spend—that’s when we need to worry the expansion is coming to an end,” McBride concluded.