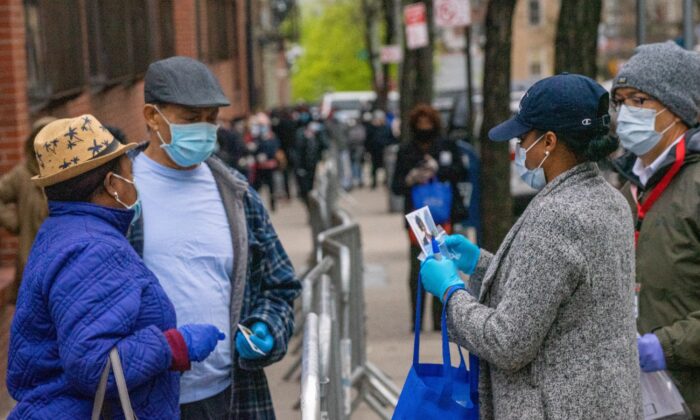 US Records Lowest Number of CCP Virus Deaths in 2 Weeks

The United States experienced the lowest number of CCP virus-related deaths in two weeks on April 20, according to new figures.

According to data provided by Johns Hopkins University, 1,433 people died from the virus in 24 hours ending on April 20, bringing the death toll to more than 42,000. It comes after more than 4,500 people died from COVID-19 in a 24-hour-period last week.

Several states have started to come up with plans to slowly reopen businesses by the end of this week. The governors of Georgia, South Carolina, and Tennessee announced dates that would see some businesses open again.

In South Carolina, following Gov. Henry McMaster’s order, certain businesses such as jewelry shops, bookstores, and others could open at 5 p.m. starting April 20. Georgia Gov. Brian Kemp said some businesses will be able to open by next week, while Tennessee Gov. Bill Lee said that his state’s stay-at-home mandate would end by April 30.

Hair salons, barbers, gyms, and other businesses will be allowed to open in Georgia on April 24, Kemp said. On April 27, restaurants and theaters will be able to open under social distancing guidelines, although bars and similar venues will be closed.

“By taking this measured action, we will get Georgians back to work safely, without undermining the progress we all have made in this battle against COVID-19,” Kemp said, adding that it “is a small step forward and should be treated as such.”

Lee confirmed that some Tennessee businesses can open on May 1.

“These businesses will open according to specific guidance that we will provide in accordance with state and national experts in both medicine and business,” he said in a statement. “Social distancing works, and as we open up our economy it will be more important than ever that we keep social distancing as lives and livelihoods depend on it.”

Around the world, Spain will begin allowing children out of their homes for brief periods next April 27. Denmark announced plans to reopen Tivoli Gardens, the Copenhagen amusement park, and Australia said doctors can resume non-urgent surgery next week. Meanwhile, Denmark, Austria, Spain, and Germany began allowing some people back to work, including hairdressers, dentists, and construction workers.