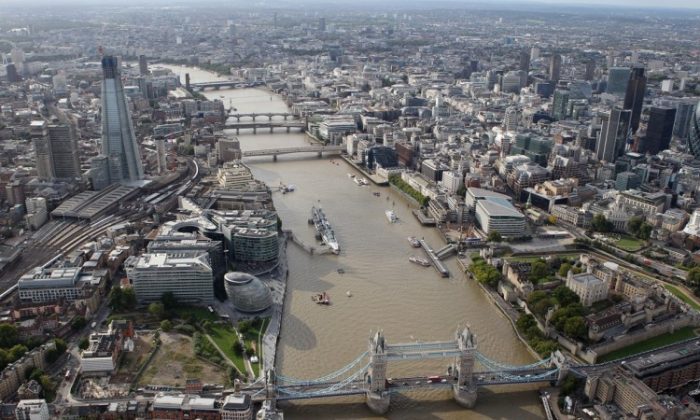 An aerial view of the Thames River in London from the air with the Shard and Tower Bridge in the foreground, in London, on Sept. 5, 2011. (Tom Shaw/Getty Images)
UK

The United States overtook the European Union to become Britain’s biggest export market for financial services after Brexit saw a shift in focus away from the continent, according to a report published Wednesday by a UK financial services advocacy group.

European investors and financial markets were cut off from the United Kingdom after its departure. Afterward, exports to the bloc fell 6.6 percent to $33 billion in 2020 when compared to the previous year, according to the report by TheCityUK. Exports to the United States, meanwhile, went up 5.3 percent, in addition to an increase of 4.1 percent to non-EU countries.

Altogether, the combined financial service exports from the UK remained the same for both years at $109 billion despite restrictions posed by the pandemic. The positions reversed roughly from 2019 as the United States received 34.2 percent of all exports, while the European Union got 30 percent.

TheCityUK is an industry advocacy group promoting the financial services of the UK. Its report measured activities across a range of related industries from banking to insurance. This is the first time the United States has come first since the group began collecting data in 2016.

Remainers (people who voted against Brexit) have argued that London’s position as a global financial powerhouse would be disrupted as European markets move away, taking with them almost 200,000 jobs in the sector.

However, London still remains a compelling and dynamic point of commerce with banking assets of $14.3 trillion in mid-2021, clearly ahead of European leaders, France at $13.2 trillion and Germany at $11.2 trillion.

The UK also boasts one of the continent’s largest insurance markets, fourth in the world, with 5.4 percent of all global premiums, and a fifth of advanced European economies. The legal service sector in the UK is the second largest globally, trailing only the United States.

In matters of international bank lending, London leads the rest of the world with almost 16 percent of all transactions, as well as 43 percent of all trade in currencies. The UK trades in almost 2.5 times the number of dollars as the United States. Hence, it seems, at least for the time being, that Brexit supporters have managed to vindicate their claims.

UK private equity players invested $37.8 billion, the largest in Europe, while 352 foreign companies were listed on the London Stock Exchange (LSE), accounting for 15.4 percent of all listings in Europe, the Middle East, and Africa.

David Frost, UK Brexit minister, said in a statement last month that the UK and European Union have failed to arrive at a deal for financial services till now, with delays predicted to last through the next year or two, reported the Financial Times. The prospective deal would allow firms in the sector, including banks, legal firms, and insurance companies to work without restrictions across borders.

“The industry is a national asset,” Anjalika Bardalai, Chief Economist and Head of Research at TheCityUK, said in the report. “The UK’s status as a world leading financial center is at risk unless industry, government, and regulators work together to boost long term competitiveness, deepen key trade links, and focus on new areas of future global growth.”