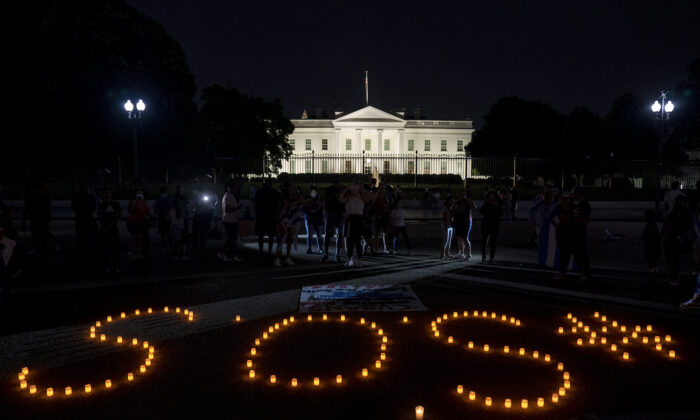 Demonstrators use candles to spell out SOS in solidarity with protests in Cuba outside the White House in Washington, DC, on July 18, 2021. (Stefani Reynolds/Getty Images)
Americas

US Organizations Ship Nearly 7 Tons of Powdered Milk to Cuba

The grassroots mobilization is the second delivery of goods organized by the NGO groups since November 2021, when eight tons of canned tuna and pasta were sent to Havana via charter flight from Miami.

Cuba is heavily reliant on imports with between 70 and 80 percent of its daily food requirements brought into the country, according to the World Food Programme.

Scarcity of essential items was the impetus behind the anti-government protests that erupted across the beleaguered island nation last July, resulting in more than 1,000 arrests of peaceful demonstrators by the communist regime’s security forces.

Powdered milk is near the top of the critical shortages list in Cuba as it is an important source of nutrients for pregnant women and children.

Lazo is the founder of the United States based, Cuban run activist group Puentes de Amor.

The group not only coordinates critical supply shipments to Cuba, it also petitions the U.S. government to intervene on behalf of the Cuban people.

“[President Joe] Biden has done nothing to improve the conditions [of the Cuban people]. That’s why I’m sad to come here with milk because it shouldn’t be like that,” Code Pink co-founder Medea Benjamin said.

While humanitarian aid to Cuba is technically permitted within the guidelines of the U.S. embargo, government officials highlighted that licensing requirements, end-use verifications, banking sector restrictions, and an overall fear of accidentally breaching U.S. regulations severely complicates the process.

In the letter to Biden officials added that protecting human rights in Cuba is better served by principled engagement rather than unilateral isolation, which they claimed is a “failed policy.”

However, Velazquez’s proclamation that “the U.S . blockade prevents us from buying in the U.S. market” runs contrary to the fact that the United States doesn’t prevent the sale or transport of food and medicine to Cuba.

Additionally, the governments of Russia, Venezuela, Mexico, Nicaragua, and Bolivia, all spearheaded efforts to send essential items to the struggling island population ranging from food and medicine, to gasoline.

Venezuela’s recent shipment of 197,000 barrels of gasoline and hundreds of bags of essential food items arrived in December at the Cuban ports of Mariel and Santiago.

On Jan. 19, the Cuban government announced the production and sale of limited powdered milk supplies, which will be sold in the Moneda Libremente Convertible or MLC currency, which is one of two types used in transactions within the country.

This was met with immediate criticism by the Cuban residents, few of whom have access to the MLC currency needed to buy the coveted government milk supplies.