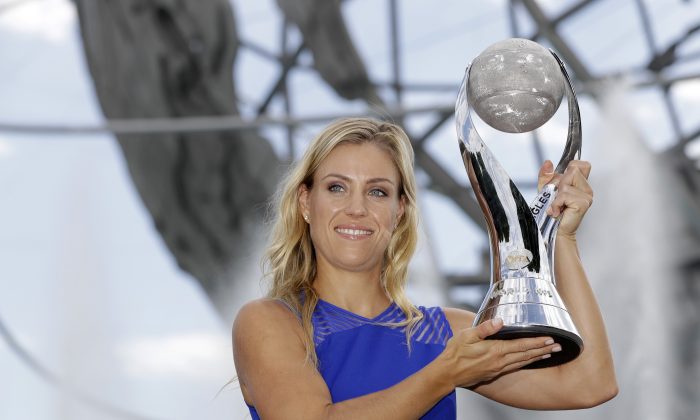 US Open Champ Kerber Replaces Williams at No. 1 in Rankings

Monday’s rankings are the first since February 2013 without Williams at No. 1.

The 28-year-old Kerber’s rise from No. 2 was assured when Williams lost in the semifinals at Flushing Meadows.

Kerber went on to beat Karolina Pliskova in Saturday’s final for her second Grand Slam title of the season. She defeated Williams at the Australian Open in January, then was the runner-up to the American at Wimbledon in July.

She is the first woman from Germany to be ranked No. 1 since Steffi Graf, who has been a mentor for Kerber. Graf and Williams share the mark for most weeks in a row atop the WTA.

“For sure, when I was growing up, Steffi was my idol,” Kerber said, “and this is also special that she is German. She did a lot for German tennis, as well. And now, to be the next after her, to be a German No. 1 and win Grand Slams, this is, for me, really important.”

Williams is now No. 2, followed by French Open champion Garbine Muguruza at No. 3, Agnieszka Radwanska at No. 4, Simona Halep at No. 5, and Pliskova at a career-best of No. 6. Pliskova was No. 11 before making it past the third round of a major for the first time and becoming the fourth woman to eliminate both Williams sisters during a Grand Slam tournament.

Roberta Vinci, the U.S. Open runner-up in 2015, dropped from No. 8 to No. 15 on Monday after losing to Kerber in the quarterfinals last week.

Victoria Azarenka went from No. 7 to No. 11; she skipped the U.S. Open because she is pregnant.

Novak Djokovic remained at No. 1 in the ATP rankings despite losing to No. 3 Stan Wawrinka in the men’s final at Flushing Meadows on Sunday night. Andy Murray stayed at No. 2.

Rafael Nadal gained one spot to No. 4, and Kei Nishikori moved up from No. 6 to No. 5. Roger Federer slid from No. 4 to No. 7 as he sits out the rest of 2016 while rehabbing his surgically repaired left knee.

Gael Monfils, who lost to Djokovic in the semifinals in New York, jumped from No. 12 to No. 8.