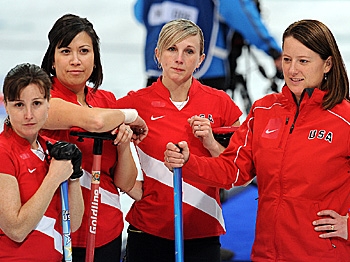 By James Fish
Print
After conceding to Canada  down 9–2 in the seventh end Sunday afternoon, the U.S. Olympic Women’s curling team was forced to concede to Sweden Sunday night, after falling behind 9–3 in the ninth end.

After the change, McCormick’s shooting percentage increased by fifty percent, but this wasn’t enough to stop the Swedish team, which made every shot, played perfect strategy, and capitalized on the slightest advantages.

Sweden played great defense, ticking off U.S guards regularly and with seeming ease, and holding the U.S. team to single points when they held the hammer.

In terms of strategy and execution this was one of the U.S. squad’s best games; they were simply overmatched.

The game started well, with the U.S. holding Sweden to one in the first end. After a blank second, Sweden returned the favor, tying at one. Sweden got two in the fourth when Pottinger’s final hit-and-roll did not get entirely behind cover, and in the fifth again held America to one.

Sweden had the hammer in the sixth and set up for a big end after a sweeping error by Pottinger cost the U.S. a good shot. After McCormick left the U.S. lying tow, Sweden’s Eva Lund threw a takeout which froze against the remaining U.S. rock at the edge of the eight-foot circle. Pottinger then drew to the button, but wanted to go deeper; again a U.S. sweeping error, however tiny, left a tiny opening for the Swedes.

Sweden called timeout, plotting a three-point strategy, but on her first shot Swedish skip Anette Norberg only got a single takeout. Pottinger responded with another draw to the button, but Norbert executed a brilliant triple-takeout with a roll to the center, getting Sweden their three.

Sweden held the U.S. to one in the seventh, blanked the eighth, and in the ninth, Sweden’s defense was faultless. The U.S. had no chance to set up the end for a steal, or even to hold at one. Pottinger’s last draw was a foot long, leaving Sweden with three, and the American team conceded.

The U.S. women’s curling team sits out Monday, and plays its final two games against world champion China Tueday noon, and Switzerland in the evening.