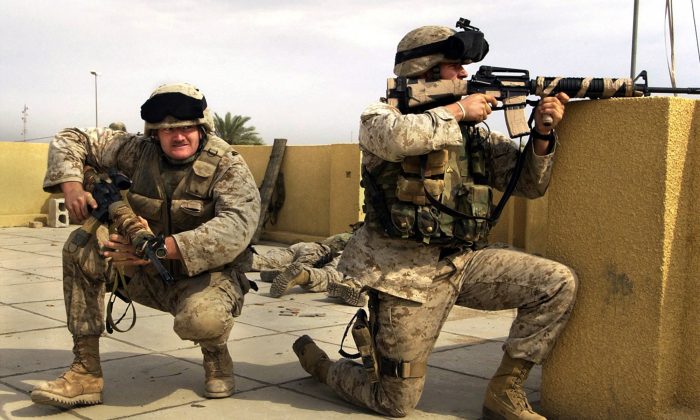 US Marine snipers from the 2nd Battalion, 5th Marine Regiment, take cover during a gun battle with insurgents in Ramadi in Anbar province, Iraq, on Oct. 31, 2004. (AP Photo/Jim MacMillan)
US

US Navy SEAL Killed by ISIS in Northern Iraq

A U.S. armed forces member was killed by ISIS militants on Tuesday near the city of Mosul, Iraq.

Operation Inherent Resolve said the service member, a Navy SEAL who was not named, “was killed in northern Iraq as a result of enemy fire.”

He was shot and killed Tuesday by “direct fire” from Islamic State militants who stormed through defenses that were implemented by Kurdish Peshmerga forces in northern Iraq, Fox News reported.

Pentagon Press Secretary Peter Cook said in a statement that the unnamed service member was advising Peshmerga forces. He was killed by small arms fire, probably from an AK-47.

The rank of the SEAL is unclear.

“It is a combat death, of course. And a very sad loss,” Defense Secretary Ash Carter said in Stuttgart, Germany. “It shows you the serious fight that we have to wage in Iraq.”

Cook elaborated to CNN: “This sad news is a reminder of the dangers our men and women in uniform face every day in the ongoing fight to destroy ISIL and end the threat the group poses to the United States and the rest of the world. Our coalition will honor this sacrifice by dealing ISIL a lasting defeat.”

In October 2015, Delta Force Master Sgt. Josh Wheeler was killed in a rescue mission that freed as many as 70 ISIS hostages. And in March 2016, Marine Staff Sgt. Louis F. Cardin was killed in March in an attack on a U.S. base in Iraq.

The Pentagon will provide more information about the SEAL who died after his next of kin have been notified, CNN reported.

After his death, the U.S. responded with F-15s and drones, dropping about 20 bombs, a U.S. official told the network.