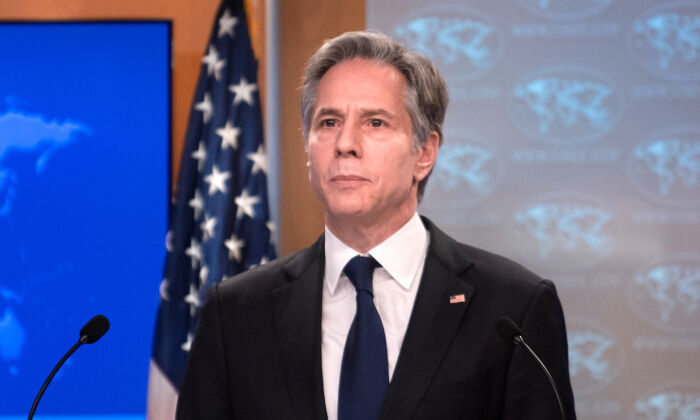 U.S. Secretary of State Antony Blinken speaks about Russia and Ukraine during a briefing at the State Department in Washington, on Jan. 26, 2022. (Brendan Smialowski/POOL/AFP via Getty Images)
International

US, NATO Respond to Russia’s Demands After Moscow Warns of ‘Retaliatory Measures’

No concessions but seeks dialogue
By Mimi Nguyen Ly

The United States and the NATO Western security alliance have responded to Russia’s security demands in separate written statements amid continued diplomatic efforts to reach a resolution over the situation in Ukraine, U.S. Secretary of State Antony Blinken said on Wednesday.

Russia in December 2021 demanded NATO to never add Ukraine and other ex-Soviet nations as members, and also demanded NATO members to pull back troop deployments in Central and Eastern Europe. Moscow has since also sent an estimated 100,000 troops with tanks and other heavy weapons to its borders with Ukraine’s northeast but denies it is planning an attack.

Washington and NATO allies have rejected Russia’s demands but have put forth a number of proposals and are seeking dialogue with Moscow.

Blinken told reporters at the White House on Wednesday that U.S. Ambassador to the Russian Federation John Sullivan delivered the Biden administration’s written responses to the Russian Ministry of Foreign Affairs in Moscow in person. He said the proposals the United States have put forward can address Russia’s concerns while enhancing the security of NATO member nations.

The Biden administration, in the document delivered to Moscow, made clear the core principles it is committed to defending, which includes “Ukraine’s sovereignty and territorial integrity, and the right of states to choose their own security arrangements and alliances,” Blinken told reporters.

“We’ve addressed the possibility of reciprocal transparency measures regarding force posture in Ukraine, as well as measures to increase confidence regarding military exercises and maneuvers in Europe,” Blinken said.

“And we address other areas where we see potential for progress, including arms control related to missiles in Europe, our interest in a follow-on agreement to the New START treaty that covers all nuclear weapons, and ways to increase transparency and stability,” he added.

Under the New START treaty, the United States and Russia are limited to an equal number of deployed strategic warheads and weapons carrying them.

Blinken said the U.S. responses to Moscow were “fully coordinated with Ukraine and our European allies and partners.”

“I expect to speak to [Russian] Foreign Minister Lavrov in the coming days after Moscow has had a chance to read the paper and is ready to discuss next steps,” Blinken said. “There should be no doubt about our seriousness of purpose when it comes to diplomacy, and we’re acting with equal focus and force to bolster Ukraine’s defenses and prepare a swift, united response to further Russian aggression.”

Shortly after Blinken’s press conference, NATO Secretary-General Jens Stoltenberg said at an online briefing that the alliance had sent a separate reply to Russia.

He called to re-establish communications and diplomatic ties between Russia and the 30-member alliance to help improve relations and prevent military incidents or accidents.

He also said that NATO is prepared to engage with Moscow in “a real conversation on how to uphold and strengthen the fundamental principles of European security.”

“This includes the right of each nation to choose its own security arrangements,” he noted, calling on Moscow to “refrain from coercive force posturing, aggressive rhetoric, and malign activities directed against Allies and other nations.”

“Russia should also withdraw its forces from Ukraine, Georgia, and Moldova, where they are deployed without these countries’ consent,” he added.

Stoltenberg also offered a series of approaches to increase military transparency and discuss arms control—including on nuclear weapons and missiles. “These areas represent an agenda for meaningful dialogue, and I have invited Allies and Russia to a series of meetings to address all of these issues in greater detail in the NATO-Russia Council,” he said.

Stoltenberg said NATO rejected any attempt to block memberships, like the United States.

“We cannot and will not compromise on the principles on which the security of our alliance, and security in Europe and North America rest,” he said, adding later: “This is about respecting nations and their right to choose their own path.”

Stoltenberg said NATO allies have in recent days increased military presence with more ships and planes in the Black Sea and the Baltic Sea region, to surveil the area in and around Ukraine and provide reassurance to allies.

He said NATO “some weeks ago” also increased the readiness of its Response Force. “This response force [is] composed of different elements and the lead element of the NATO Response Force consists of around 5000 troops. It’s currently led by France. But also other Allies contribute troops to this lead element, and it can be deployed within days.”

“We will read it. Study it. The partners studied our project for almost a month and a half,” he said.

Prior to the responses to Russia’s demands, Russian Foreign Minister Sergey Lavrov told Russian lawmakers on Wednesday that he and other top officials will advise President Vladimir Putin on the next steps, reported The Associated Press.

“If the West continues its aggressive course, Moscow will take the necessary retaliatory measures,” Lavrov said, adding, “We won’t allow our proposals to be drowned in endless discussions.”

The U.S. State Department on Jan. 23 ordered the evacuation of family members of staff from its Kyiv embassy in Ukraine and urged for all Americans in Ukraine to “consider departing now using commercial or other privately available transportation options.”

Blinken on Wednesday reiterated that Americans should “strongly consider leaving” Ukraine, adding that the embassy “may extend loans to those who can’t afford the cost of a commercial ticket.”

“If Russia invades, civilians—including Americans still in Ukraine—could be caught in a conflict zone between combatant forces,” he warned. “The U.S. Government may not be in a position to aid individuals in these circumstances. This has long been the case in conflict zones around the world.”

Separately, Oleksii Reznikov, Ukraine’s Minister of Defense, told Ukrainian citizens on Jan. 24 that, at the current time, “there are no grounds to believe” that Moscow is preparing an invasion in the near future, and there is no need for citizens “to have [their] bags packed.”

President Joe Biden is considering whether to deploy U.S. troops to Eastern Europe to join efforts to defend Ukraine and allied countries. The Pentagon announced on Jan. 24 that, should the situation warrant, 8,500 American troops are at a “heightened readiness to deploy.”