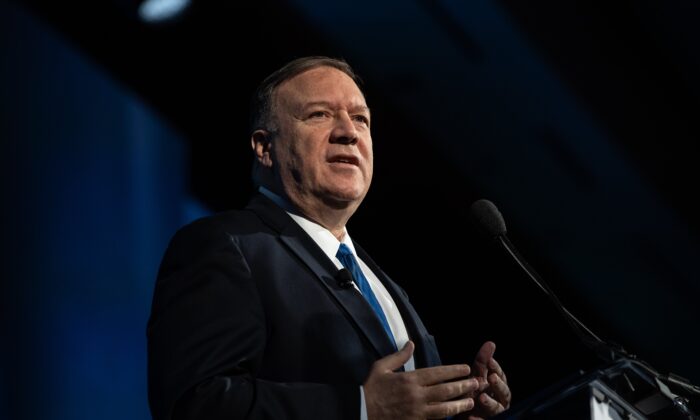 US Must Confront Threats Posed by Communist China: Pompeo

In a speech criticizing the hostile policies of the Chinese regime, U.S. Secretary of State Mike Pompeo said the country must come to grips with the consequences of China’s aggression, or risk serious threats to U.S. national security.

He was the second senior U.S. official to censure the Chinese regime within a week, after Vice President Mike Pence’s speech on U.S.–China relations on Oct. 24.

“The Chinese Communist Party is offering its people and the world an entirely different model of governance. It’s one in which a Leninist Party rules and everyone must think and act according to the will of the Communist elites,” Pompeo said during an Oct. 30 address at the Hudson Institute in New York City, upon receiving the 2019 Herman Kahn Award, which honors leaders who make significant contributions to safeguarding democracy around the world.

Pompeo went on to say that no one living in democracies nor “freedom-loving people of China” would want such a future.

Thus, the United States needs to confront the challenges from the Chinese Communist Party “head-on,” he said.

That includes recognizing “fundamental differences between our two systems and the impact … the differences in those systems have on American national security,” he said, adding that he will expound on each issue that “China forced upon us” in a series of future remarks.

Pompeo stressed that the threats that China posed are not problems for the United States alone, but “for all nations that share our values.”

Pompeo lamented that past administrations did not recognize China’s threats, allowing the Chinese regime to assert global dominance and bully neighboring countries.

“We accommodated and encouraged China’s rise for decades, even when that rise was at the expense of American values, Western democracy, and security, and good common sense,” he said.

To “normalize relations with Beijing,” for example, the U.S. administration for a long time had “downgraded” its relationship with Taiwan and shied away from speaking directly about the human rights abuses in China, such as the Tiananmen Square Massacre, Pompeo said, referring to Beijing’s violent suppression of pro-democracy protesters in 1989.

He emphasized that the United States is standing on the side of Hong Kong and Xinjiang in light of “China’s regime trampling the most basic human rights” of the people there.

Hong Kong, a former British colony that returned to Beijing’s rule in 1997 under the promise of preserving its freedoms and autonomy, has seen nearly five months of protests against what Hongkongers perceive as increasing Chinese Communist Party influence in the city.

In the far western region of Xinjiang, Chinese authorities have detained a million or more Uyghurs and other Muslim minorities in “re-education” camps. A local police officer recently told Radio Free Asia that at least 150 people had died while in detention between June and December 2018.

We accommodated China’s rise, in the hope that they would become more free. In response, the CCP took advantage of our goodwill. Now, @realDonaldTrump is facing the reality of CCP hostility to the U.S. and our values. We must engage China as it is, not as we wish it to be. pic.twitter.com/MSGxlBex51

U.S. lawmakers have recently introduced bills to strengthen U.S. ties with Taiwan, a self-ruled island with its own democratically-elected government and military, after Beijing pressured two of its diplomatic allies to switch ties in recent months.

Pompeo also called out Beijing’s pressuring of U.S. companies that have business stakes in the mainland, forcing them to toe the line on “any topic that the Chinese Communist Party deemed controversial.”

Furthermore, he said that Chinese state-run media and government spokespeople are exporting the regime’s propaganda abroad and trying to shape Americans’ views on China—part of the “predictable byproducts of dealing with a secretive regime that doesn’t respect fairness, the rule of law, and reciprocity,” he added.

Party versus the People

Similar to Pence’s Oct. 24 remarks in Washington, Pompeo also made a distinction between the Chinese Communist Party and the Chinese people.

“We have a long-cherished tradition of friendship with the Chinese people. We continue to do so today,” he said, adding that the ruling Chinese regime is “not the same.”

“The Chinese Communist Party is a Marxist-Leninist Party focused on struggle and international domination. We need only listen to the words of their leaders,” Pompeo said.

He stressed in the speech that the United States does not seek confrontation with the Chinese regime, but rather to “see a prosperous China that is at peace with its own people and with its neighbors.”

As the two sides come close to signing the first phase of a comprehensive trade deal, the United States hopes to construct a “fair, reciprocal, and balanced” economic relationship, he said.