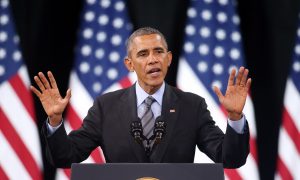 David Judson: Hi I’m David Judson, Editor-and-Chief at Stratfor. With me today is George Friedman, our Chairman and Founder. George, thank you for joining me and taking some time. I just wanted to take a few minutes to discuss North America generally in light of President Obama’s decree, which is on immigration, which is being much discussed. The issue that I think is worth talking about a bit here is the work you’ve done and we’ve done here at Stratfor on the assumptions that underlie this, that the pressure of migration north from Mexico to the United States is assumed to be a sort of permanent state. Maybe, maybe not?

George Friedman: Well, to begin with, birthrates are falling everywhere in the world. In some cases like Bangladesh it’ll take a long time to reach zero population growth. In Europe and parts of Asia it is already gone below replacement population decline. In the United States, one of the things stabilizing the population is immigration. One of the things about the United States is we’re very good at metabolizing immigrants. But still, in order to maintain our population at levels we’ve had, which is still a very low density compared to Europe or Asia, we need immigration. That’s a statistical matter. This has nothing to do with whether or not you approve of what Obama did. That was a completely separate issue. But the fact is that immigration into the United States has always been a feature that drove the economy. It was always regarded by those who were already here as a danger, both to the economy paradoxically, but also to the culture that we’d built. And we manage it fairly well. Therefore, whenever we look at Mexican immigration, we need to talk about the general problem, population stabilization and the fact that the Mexicans themselves are going to reach zero population growth by the middle of the century.

David: Yeah. I think this is an interesting, this is the interesting demographic point that the debate we are having today could be very different. Mexico’s economy grows, the demand for skilled labor grows even faster. Is it possible that we will see, not a reverse migration of course, but a demand of northern people now living and working in the north wanting to move south?

George: Well certainly we see a decline in Mexican immigration. A lot of the immigrants coming in now are coming from Guatemala or elsewhere in Central America. As the Mexican economy grows, it’s the 13th largest in the world I think right now, the effort to get to the United States just isn’t worth. There are jobs. There are things available in Mexico. So, there’s a difference to the question of immigration in general: Hispanic immigration and Mexican immigration. And the fact is that at this point you have a very large illegal Mexican population in the United States. I really don’t like the term undocumented; I don’t know what that means. You have a very large population, but it’s not necessarily being joined by a lot of new people. So the issue is not just border security, but really what do we do with these migrants who have found jobs here, who clearly are filling some function in the economy and moving forward. But we also have to remember that the Mexican immigration is different from immigration from any other country.

David: Sure, because this large part of the United States was Mexico. Those cultural ties and cultural reference points have remained in place. So that, I think maybe is it fair to characterize that the cultural borders and the political borders don’t align necessarily altogether?

George: Well also what is the relationship of the Mexican immigrant to the home country? Every immigrant, the Irish, the Italians, had some sort of relationship with the home country. But it was far away. It wasn’t a car ride away and it became distant over time. Loyalty shifted. In the case of Mexico, which is the one country where we get large amount of immigration from, it is less a question of leaving you’re country behind with an ocean in between, but a relatively short move. And as you move northward, you move into an area that used to be part of Mexico.

George: Certain versions of Spanish is still spoken, there is a Spanish population, but as far north as Denver, this used to be part of Mexico that was lost during the Texas uprising during the Mexican-American War. The point is not that this is a historical restoration, but it is simply that unlike any other country, you drive home. And that builds a different relationship, a more intimate relationship. So, to those who are saying that we should end immigration, they really are mistaken on the question of what America needs. For those who are disturbed at the political and social impact of Mexican immigration, there is an issue that needs to be addressed. But in the end, the United States needs immigrants, it has always needed immigrants, it continues to need immigrants. There are those people who don’t think it does, they’re not looking at the numbers or the birthrate. The birthrate of the native population has plunged over the past years, it has not replaced itself and at the end of the day, if we are going to maintain a stable population in what is still an under-populated continent, we’re going to need immigration from somewhere. But I don’t think it’s going to come from Mexico. They’re doing pretty well themselves.

David: That’s really interesting George. Thank you for these insights. You’ve touched upon a lot of topics that are probably not a part of the ongoing debate at this moment. Anyhow, for more on the geopolitics of migration and many other topics, join us here at Stratfor. Thank you George.

“Conversation: U.S.-Mexico Immigration Driven by Demography” is republished with permission of Stratfor.