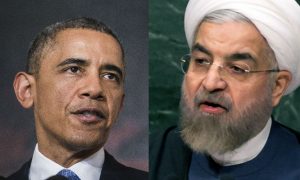 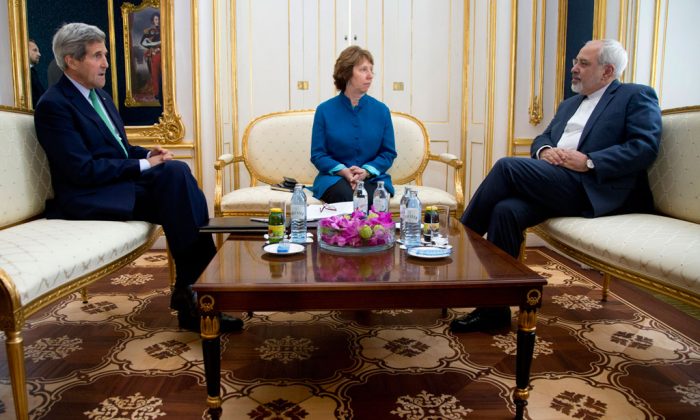 (L-R) US Secretary of State John Kerry, European Union High Representative Catherine Ashton, and Iranian Foreign Minister Mohammad Javad Zarif are photographed as they participate in a trilateral meeting in Vienna, Austria, on Oct. 15, 2014. Iran and six world powers are closer than ever to a deal that would crimp Tehran’s ability to make nuclear arms - a status that would lead to a progressive end to sanctions on the Islamic Republic and ease tensions that could boil over into a new Middle East war. The bad news? Substantial differences remain. (AP Photo/Carolyn Kaster)
Middle East

LONDON—Bill Clinton tried. So did George W. Bush. Neither succeeded. As President Barack Obama’s own second term winds down, he is getting closer than either of his immediate predecessors to the goal of improving U.S. relations with Iran. But he’s not there yet, and plenty stands in the way, including a messy and brutal conflict in Iraq and Syria.

As high-stakes negotiations with Iran over its nuclear program resumes Tuesday in Vienna ahead of a Nov. 24 deadline for a deal, the ghosts of previous failed attempts at American-Iranian rapprochement loom large. So do very real and current concerns, largely the rise of the Islamic State in Iraq and Syria, fierce opposition to a deal from Israel and open hostility in Congress and hardliners in Iran who already look to be trying to derail a potential agreement.

Those issues, combined with the complex nature of the negotiations, have made for slow going and increased chances for something less than a full deal being struck by the target date. Officials say an extension of the already once-extended talks is possible, but warn additional delays will invite more complications.

Obama and his top aides deny that anything other than resolving the nuclear deadlock is in play. Yet, they also acknowledge a deal is key to any broader improvement in relations, something Obama is reported to have conveyed in a recent letter to Iran’s Supreme Leader Ayatollah Ali Khamanei.

Though it hangs over the process, what appears to be a shared U.S.-Iranian interest in defeating Islamic State has been raised only tangentially. The Obama administration’s goal is to ultimately defeat the militants, whose rise it blames on atrocities committed by Syrian President Bashar Assad and the failure of the previous leadership in Iraq.

Iran shares America’s goal of defeating IS, but while it may have acquiesced to the ouster of pro-Iranian Iraqi President Nouri al-Maliki earlier this year, it has not given up on Assad, who the U.S. insists must go.

Hence, Obama is treading carefully as many demand more be done to get rid of Assad. He has rejected suggestions that more U.S. aid to Syrian rebels is aimed at toppling Assad.

The U.S.-Iran divergence on Assad alone would be problematic, but it’s far from the only non-nuclear point of contention.

Decades of mistrust weigh heavily on the talks. And they go back further than the 1979 Islamic Revolution in Iran and the hostage-taking at the U.S. Embassy. Iranians also have long memories of U.S. support for the 1953 coup that overthrew Iran’s prime minister, Mohammed Mossadeq.

For the past 14 years, the US has tried to undo some of that damage. At the same time, they have increased pressure on Iran by imposing sanctions on it for sponsoring U.S.-designated terrorist organizations, supporting anti-Israel groups, rights abuses and its nuclear program.

The Clinton administration sought to capitalize on the 1997 election of reform-minded Iranian President Mohammad Khatami by easing some sanctions, acknowledging the U.S. role in the 1953 coup and engaging in limited contact over the situation in Afghanistan.

That contact intensified after the Sept. 11, 2001, and the American-led ouster of the Taliban from Afghanistan, but quickly became snagged again over Iranian nuclear activity, President George W. Bush’s branding of Iran as a member of the “axis of evil” and the imposition of new sanctions.

Yet, even the Bush administration sought to ease tensions, reversing a decision not to participate in nuclear talks between Iran and European nations. Former Secretary of State Condoleezza Rice proposed in 2008 that the U.S. open an interests section in Tehran to restore an American diplomatic presence.

Hostility from Iran’s leaders, along with growing nuclear concerns and the detentions of Americans in Iran, ran high as Obama moved into the White House in 2009 and sanctions were expanded.

The election of Hassan Rouhani swung the pendulum back. Obama initiated secret discussions with Iran in 2013 that led to an agreement on an interim nuclear deal. That interim deal and Obama’s September 2013 phone call with Rouhani — the highest-level contact between the two countries since 1979 — are the high points of the rapprochement to date.

Surpassing them to restore even a semblance of normalcy to the relationship may require more than a nuclear agreement, though, as both sides suspect the other may renege. Then, there is the chance lawmakers or new leadership in either capital might rescind a pact.

With so much boding ill for the prospects of a nuclear deal, it may not mean the third time’s the charm for U.S.-Iran rapprochement.