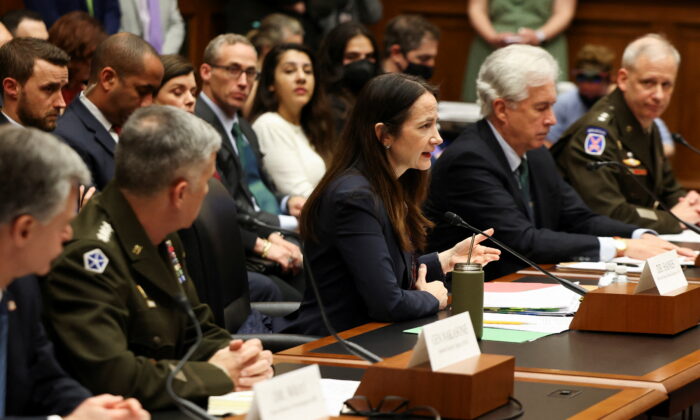 Director of National Intelligence Avril Haines (C) and other U.S. intelligence officials testify to members of Congress in Washington on March 8, 2022. (Evelyn Hockstein/Reuters)
By Jack Phillips

Director of National Intelligence Avril Haines issued a warning to parents about the risks to children posed by social media app TikTok, which is owned by a Chinese Communist Party (CCP)-linked company based in Beijing.

Haines told NBC News on Sunday that the Chinese regime is “extraordinary” in how it collects “foreign data,” posing national security and privacy risks.

Later, when she was asked by an NBC reporter about whether parents should be concerned by their children using that app, Haines said, “I think you should be.”

Some of the reasons why parents and Americans should be concerned, Haines added, is the Chinese regime’s ability to obtain foreign data and “target audiences for information campaigns or for other things, but also to have it for the future so that they can use it for a variety of means that they’re interested in.”

TikTok is among the most popular social media platforms in the world and in the United States. It is primarily used by youth, fueling concerns about what messages are being promoted on the app, which is operated by Beijing-based ByteDance.

Several weeks ago, Federal Communications Commission (FCC) member Brendan Carr said TikTok should be banned from the United States entirely, saying it is not possible for U.S. officials to determine whether the CCP does not have access to TikTok users’ data. In 2020, former President Donald Trump called for a ban on the app and issued an executive order to restrict its usage. It was reversed about a year later by President Joe Biden.

Not only Republicans, but a growing number of Democrats have signaled that TikTok is a national security threat.

“I think Donald Trump was right. I mean, TikTok is an enormous threat,” Sen. Mark Warner (D-Va.), the chair of the Senate Intelligence Committee, told Fox News last month. “So, if you’re a parent, and you’ve got a kid on TikTok, I would be very, very concerned. All of that data that your child is inputting and receiving is being stored somewhere in Beijing.”

And it isn’t “just the content you upload to TikTok but all the data on your phone, other apps, all your personal information, even facial imagery, even where your eyes are looking on your phone,” Sen. Tom Cotton (R-Ark.) noted in another interview with the network. The app is “one of the most massive surveillance programs ever, especially on America’s young people,” he added.

Months before that, Warner and Sen. Marco Rubio (R-Fla.) called for an investigation into whether the CCP can access TikTok users’ data, according to a letter they sent to the Federal Trade Commission. They made reference to reports from The Epoch Times and other outlets that indicate CCP-linked individuals have access to TikTok’s data for U.S. users.

FBI Director Christopher Wray recently stated that TikTok is part of the CCP’s strategy to gather data on individuals around the world. What the regime will use the data for, officials say, is not clear.

“We do have national security concerns, obviously from the FBI’s end, about TikTok,” Wray said during testimony to Congress in November. “They include the possibility that the [CCP] could use it to control data collection on millions of users, or control the recommendation algorithm which could be used for influence operations if they so choose, or to control software on millions of devices.”

The Epoch Times has contacted TikTok parent ByteDance for comment.

A spokesperson for TikTok told ABC News earlier last month that it “has no role in the confidential discussions with the U.S. government related to TikTok and appears to be expressing views independent of his role as an FCC commissioner.” It was responding to Carr’s statement that the app should be blocked in the United States.

“We are confident that we are on a path to reaching an agreement with the U.S. Government that will satisfy all reasonable national security concerns,” the company spokesperson added.