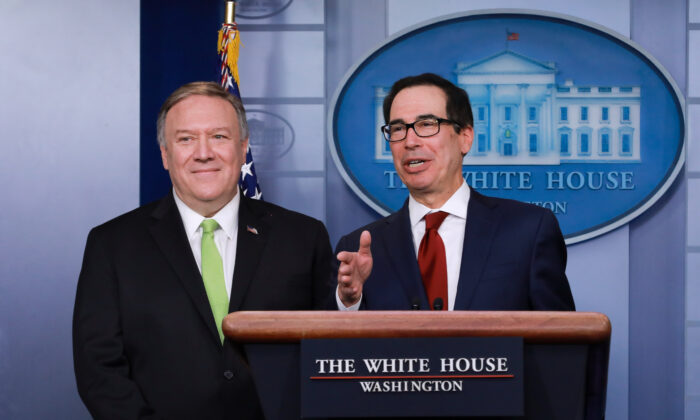 Secretary of State Mike Pompeo (L) and Secretary of the Treasury Steve Mnuchin at a media conference in the White House briefing room in Washington on Jan. 10, 2020. (Charlotte Cuthbertson/The Epoch Times)
US News

US Imposes Additional Sanctions on Iran After Missile Strikes

The sanctions, which include 17 specific sanctions against Iran’s largest steel, iron, aluminum, and copper manufacturers and eight senior Iranian officials who were involved in Tuesday’s ballistic missile strike, come “as a result of the attack on U.S. and allied troops,” Mnuchin told reporters at the White House.

President Donald Trump issued an executive order enabling administration officials to sanction people operating in or transacting with additional sectors of the Iranian economy, including construction, mining, manufacturing, and textiles.

“Today’s sanctions are part of our commitment to stop the Iranian regime’s global terrorist activities,” he said, adding the sanctions would continue “until the regime stops the funding of global terrorism and commits to never having nuclear weapons.”

Trump said in a statement: “Today, I am holding the Iranian regime responsible for attacks against United States personnel and interests by denying it substantial revenue that may be used to fund and support its nuclear program, missile development, terrorism, and terrorist proxy networks, and malign regional influence.”

Mnuchin said the economic sanctions were working. “If we didn’t have these sanctions in place, Iran would literally have tens of billions of dollars,” he said, adding that the money would be used for terrorism.

If the Obama administration hadn’t turned over $150 billion to Iran as part of the nuclear deal President Barack Obama and world powers agreed upon with the Iranian regime, Mnuchin said, the current situation wouldn’t be the same.

Pompeo said earlier in the day during an appearance on Fox News that “the money that the Iranian regime was permitted to have underwrote the very Shia militias that were the ones that took on and ultimately killed an American.”

“One of the central tactics of our strategy is to deny the Iranian regime the money” to carry out terrorism, he said.

“We’ve only been at that for about 18 months now, so there is still work to do. But make no mistake about it: The wealth that was created inside of the Islamic Republic of Iran went directly to the IRGC and the senior Iranian terrorists, and that money ultimately ends up in the hands of people who wanted to do Americans harm,” he added.

“So money’s fungible, it can move around, but they had the resources, they the ability to build out the militias in Syria, to underwrite Hizballah, to build their missile program. All of the things that we are now confronting are a direct result of the resources that the regime had available as a result of that terrible nuclear deal.”