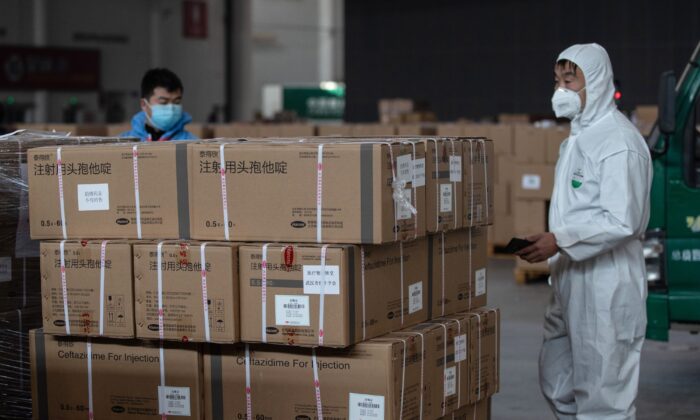 Staff members and volunteers transfer medical supplies at a warehouse of an exhibition center which has been converted into a makeshift hospital in Wuhan, China, on Feb. 4, 2020. (STR/AFP via Getty Images)
By Janita Kan

A group of healthcare workers is seeking to hold the Chinese Communist Party (CCP) responsible for allegedly hoarding personal protective equipment (PPE) as frontline healthcare workers are battling the CCP virus in the United States.

The healthcare workers are suing the Chinese regime in a lawsuit filed by The Berman Law Group in a Florida court on Wednesday. The lawsuit claims that the CCP is deliberately buying up medical-grade protective masks, face and eye shields, and other protective equipment, while blocking exports on these supplies, in order to sell the items at substantively higher prices.

The alleged hoarding happened at a time when the Chinese regime was aware of the severity and transmissibility of the virus in the early stages of the outbreak, according to the lawsuit. It alleges that the CCP suppressed such information, censored reports, and made false information, leading to the virus’s spread.

As a result, frontline healthcare workers in the United States were put at serious risks of death, infection, and other injuries as they struggle to find PPE to protect themselves amid the shortage, the complaint said.

“They did this in January but they continue to do it all the way through March and that may be the even more despicable part of it,” Jeremy Alters, the chief strategist and non-attorney spokesperson of the lawsuit from Berman Law Group, told The Epoch Times. “You know, they don’t have 700 cargo planes headed over here with masks and respirators, and all of the things they should be doing to solve the problem they cause. Instead, our healthcare workers are being affected and dying as a result of it.”

Between Jan. 24 to Feb. 29, China imported 2.46 billion shipping cartons of supplies for epidemic prevention, valued at 8.21 billion yuan ($1.158 billion), according to recent Chinese customs data. Among them were 2.02 billion protective masks and 25.38 million protective suits.

During that time, Chinese authorities, the regime’s foreign affairs ministry, and Chinese embassies around the world attempted to mobilize the Chinese diaspora to help buy up goods from around the world.

In one example, the CCP’s United Front Work Department, an agency dedicated to spreading the regime’s agenda inside and outside China, encouraged all overseas Chinese to buy up all available medical materials and send them back to China.

It is unclear how the Chinese regime is using the supplies that they’ve amassed.

Geng Shuang, the ministry’s spokesman, replied, “China still needs a large number of masks, and the supply cannot meet the demand. At the current phase, other countries will face difficulties when they try to purchase masks from China.” But Geng denied that the government was forcing businesses to stop exporting medical supplies.

Navarro said China tried to “corner the world market in personal protective equipment. … They were buying large quantities of masks, gloves, goggles, respirators from the rest of the world at a time when the world was still sleeping with respect to the dangers of the virus.”

The healthcare workers named in the complaint include two doctors, two nurses, and a surgical technician from different states across the country. Two of the plaintiffs have tested positive for COVID-19, the disease caused by the CCP virus, while the others have been tested and are awaiting results.

Alters said these plaintiffs listed in the complaint represent the class action and that the firm has already well over 100 doctors, nurses, and healthcare providers who have signed up to join the suit.

This is not the first class-action lawsuit The Berman Law Group has filed on behalf of Americans against the Chinese regime. Last month, the law firm filed a suit in Florida, alleging that Beijing’s initial cover-up resulted in the worldwide pandemic.

The lawsuit alleges that the CCP “knew that COVID-19 was dangerous and capable of causing a pandemic, yet slowly acted, proverbially put their head in the sand, and/or covered it up for their own economic self-interest.”

“China has failed miserably to contain a virus that they knew about as early as middle of December. In failing to contain that virus, they have unleashed a pandemic on the world, which, in very large part, could have been contained if they would have told the world health providers, people dealing with the issue, people who could help about it as early as early January,” Alters said in a separate interview.

There were over 454,000 confirmed cases and 16,200 deaths in the United States on Thursday evening, according to data compiled by Johns Hopkins University.

“We are not going to let the CCP and the People’s Republic of China get away with harming our health care workers who are our heroes,” Alters said.