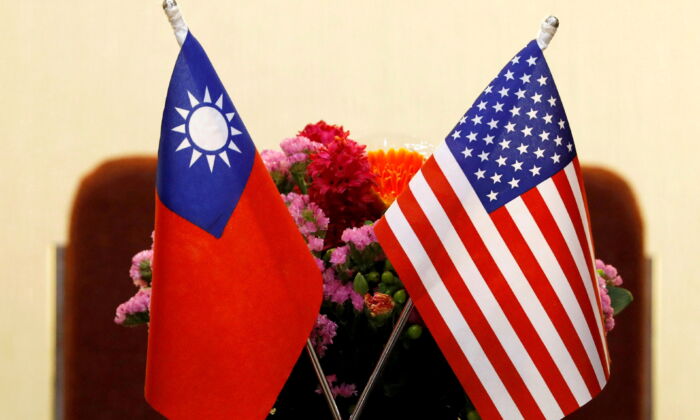 A file photo of the flags of Taiwan and United States are placed for a meeting in Taipei, Taiwan, on March 27, 2018. (Tyrone Siu/Reuters)
US News

US Has ‘Rock-Solid’ Commitment to Help Taiwan Defend Itself, Senior Diplomat Says

As the communist regime in China ramps up its pressure against Taiwan, the United States needs to assist the island nation in maintaining a sufficient self-defense capacity, the top U.S. diplomat for Asia said on Dec. 2.

“As the threat and coercion from the People’s Republic of China increases, I think we need to respond as well in an appropriate way,” Daniel Kritenbrink, assistant secretary of state for East Asian and Pacific Affairs, told reporters in Singapore, specifically citing support over self-defense and trade.

While the United States doesn’t have diplomatic relations with Taiwan, it maintains robust ties with the democratic island under a framework set out in the Taiwan Relations Act, which obliges Washington to provide Taipei with the means to defend itself.

“We intend to live up to our obligations: our rock-solid obligations and commitments,” said Kritenbrink, who is on a visit to Southeast Asia.

The remark came as Beijing’s escalating military harassment toward the self-ruled island it claims as its own has triggered growing alarm in Taipei and Washington.

On Nov. 27, Beijing sent 27 military aircraft into Taiwan’s air defense zone, the largest number of aircraft of the month. Taiwan recorded only one day in November without such an incursion.

The island’s defense ministry told reporters on the sidelines of a parliamentary briefing that the regime’s “non-stop” incursions have made the cross-strait situations “particularly grim.”

The defense minister has previously described the military tensions with its neighbor as the worst he’s seen in 40 years, warning that the regime would have the ability to launch a full-scale invasion by 2025.

The Chinese regime has never renounced the use of force to seize the democratically ruled island. Taiwanese President Tsai Ing-wen said that the island doesn’t seek military confrontation, but would “do whatever it takes to defend itself.”

Beijing also warned that Taiwan is the most sensitive issue in its relations with Washington.

Washington maintains a long-standing policy toward Taiwan, known as “strategic ambiguity,” meaning that U.S. administrations have been deliberately vague on whether it would defend the island in the event of a Chinese invasion. However, the United States is the island’s most important arms supplier and international backer.

On Nov. 25, a U.S. congressional delegation met with Tsai in a surprise one-day visit to Taipei, reaffirming Washington’s “rock-solid” support.

“Our commitment to Taiwan is rock solid and has remained steadfast as the ties between us have deepened,” Rep. Mark Takano (D-Calif.) told Tsai. “Taiwan is a democratic success story, a reliable partner, and a force for good in the world.”