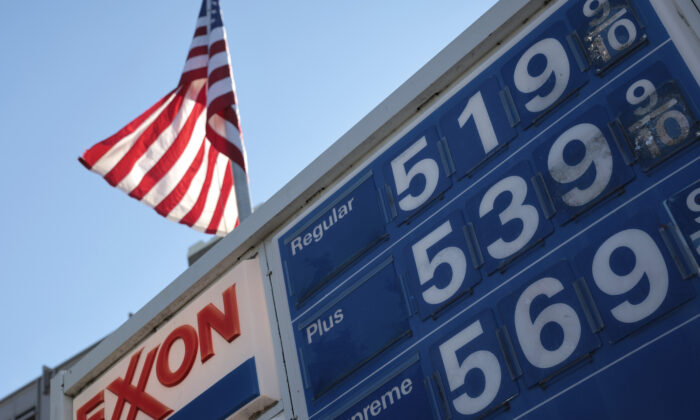 Prices for gas at an Exxon gas station on Capitol Hill in Washington are seen March 14, 2022. (Win McNamee/Getty Images)
Commodities

US Gas Prices Up Again Due to Low Supply, High Crude Oil Costs

Gasoline prices rose again across the United States, mainly due to the rising cost of crude oil, AAA announced on May 2.

The national average for a gallon of gas on May 2 was $4.19, a weekly increase of 7 cents per gallon from April 29 and a year-over-year increase of $1.29 per gallon, AAA reported.

“Gasoline prices have continued their rally in the last week with oil prices sustaining higher levels,” said Patrick De Haan, head of petroleum analysis at GasBuddy, in a statement on the GasBuddy website.

Crude oil was trading lower early the morning of May 2 and was down 3 percent to $101.65 a barrel.

Oil prices account for about 60 percent of prices at the pump, with the cost of a barrel of crude hovering at about $100 a barrel.

The disruption of global energy supplies since the Russian invasion of Ukraine and the subsequent sanctions on Moscow have hit already high gas prices worldwide.

“As long as the supply remains tight, it will be hard for crude oil prices to fall and consumers will in turn face higher prices at the pump,” said Andrew Gross, a AAA spokesperson, in the agency’s announcement.

Lower demand for gas normally pushes prices down at the pump, but fluctuating oil prices and tightening gasoline supplies are pushing pump prices higher, since crude oil prices remain above $100 per barrel.

Oil prices briefly declined in the last week of April due to lessening global demand following the lingering lockdowns in China, but prices had risen earlier in that week due to the EIA report showing that the current level of U.S. crude stocks was approximately 16 percent lower than at the end of April 2021.

The motorist advocacy group said the market will be focused on the results of the upcoming OPEC+ conference on May 5, which may see the oil cartel raise production to help meet global demand.