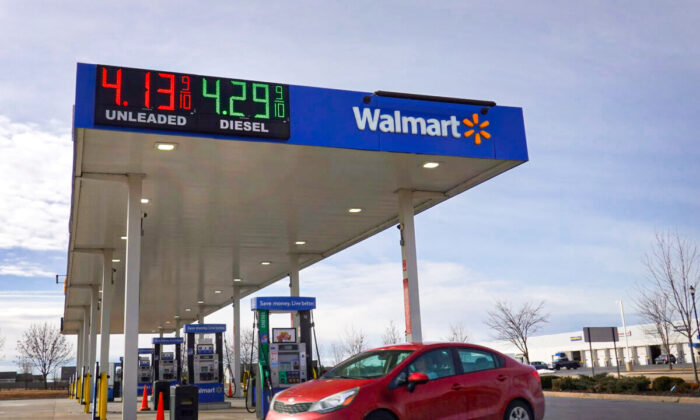 Fuel prices are displayed on a sign at a gas station in Roscoe, Ill., on March 3, 2022. (Scott Olson/Getty Images)
Economy

U.S. gas prices have surged in recent days, with the national average striking $4 a gallon on March 5.

GasBuddy, which tracks prices, recorded the average hitting $4 a gallon for the first time since 2008. The American Automobile Association (AAA) said the average was $3.92, though some motorists were paying as much as $5.18 a gallon.

The price rise has been dramatic, increasing about 41 cents per gallon in the past week alone.

“We are looking at pretty significant spikes,” Patrick De Haan, an analyst for GasBuddy, said in a Facebook broadcast.

Experts say the Russia–Ukraine war, which started on Feb. 24, is the primary factor behind the leap in prices. Russia is the world’s third-largest oil producer and the largest exporter; its exports of around 5 million barrels a day of crude oil, accounting for about 12 percent of global trade, according to the International Energy Agency.

“Like the U.S. stock market, the oil market responds poorly to volatility. It’s an explosive situation, and a grim reminder that events on the far side of the globe can have a ripple effect for American consumers,” Andrew Gross with the AAA said in a recent statement.

The price of oil will likely continue to rise as additional sanctions are imposed on Russia, predicted AAA. As the price of oil rises, people pay higher prices at the pump. The restriction in supply is coming as demand increases.

Based on recent developments, De Haan is projecting the national average hits $4 a gallon in under three weeks. The all-time record of $4.10 a gallon, set in 2008, could fall by April 1.

“We are likely to set all-time new records in the U.S.,” he said.

Tom Kloza, founder of the Oil Price Information Service, said on Twitter he thinks prices will hit the $4.25 to $4.50 a gallon range soon.

President Joe Biden’s administration has so far resisted calls for banning Russian oil, warning it would cause prices to spike even higher.

“Anyone who is calling for an end to the carve-out should be clear that that would raise prices,” White House press secretary Jen Psaki told reporters in a recent briefing.

The United States and the International Energy Agency released 60 million barrels of oil from reserves to try to stabilize markets but that amount represents just 14 hours of global consumption, De Haan said.

At least 100 million barrels would have to be released to impact the markets, according to the analyst, who recommended the administration waive seasonal fuel requirements over waiving the federal gas tax.