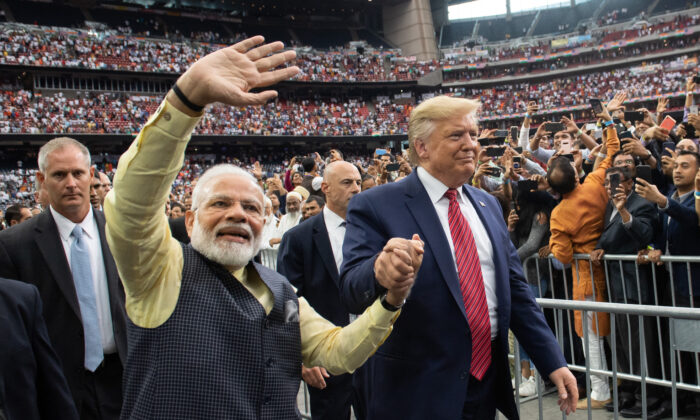 A U.S. energy firm is set to sign a Memorandum of Understanding (MoU) with India’s Nuclear Power Corporation for the supply of six nuclear reactors during President Trump’s trip to the country next week. Experts said this will be a major step forward for both countries.

American energy firm Westinghouse will sign the agreement with the state-run Nuclear Power Corporation of India (NPCIL), aiming to kickstart a long-pending project, according to an exlusive Reuters report.

“We are encouraging moving forward with Westinghouse and NPCIL to sign a MoU. It certainly is a private industry to private industry, a business to business decision,” Dr. Rita Baranwal, assistant secretary for the Office of Nuclear Energy in the U.S. Department of Energy, told Reuters over the phone.

Baranwal is optimistic that the agreement will be signed during Trump’s upcoming visit. Indian and American analysts told The Epoch Times that if signed, the agreement would mean a major boost for the relationship between both the countries.

“It would be the first in many steps required to operationalize a deal for Westinghouse to build nuclear reactors in India. The historic nuclear deal signed by India and the U.S. in the mid-2000s was successful in welcoming India into the club of accepted international nuclear powers,” Jeff M. Smith, a research fellow in Heritage’s Asian Studies Center, told The Epoch Times in an email.

“But the promise of the U.S. supplying nuclear reactors to India has thus far gone unfulfilled. The two sides have been engaged in on-again-off-again negotiations for roughly a decade. If this MoU does serve as the catalyst for final negotiations, and helps to resolve some longstanding obstacles related to liability, it would mark a significant step forward,” he said.

Westinghouse and NPCIL did not respond to Reuters’ request for comment, but Indian foreign ministry spokesman Raveesh Kumar confirmed on Thursday that the two companies were in talks to take the project forward.

Aparna Pande, Research Fellow and Director of Hudson Institute’s Initiative on the Future of India and South Asia, told The Epoch Times that if signed, the agreement would mean much more for the trade relationship between the two countries.

“In today’s climate when India is seen as more protectionist and needs foreign investment, this deal means India is again open for companies,” she said.

President Trump has been seeking greater access to the Indian market for American products and Pande said the deal will also help build India’s image.

“What this Westinghouse deal will show is the final fruition of something that was expected as a positive outcome of the India-U.S. civil nuclear deal,” she explained.

“The deal, unlike the defense deals, is also economic so will help boost India’s image in the eyes of President Trump because an American company will benefit,” said Pande.

However, Brahma Chellaney, a geopolitical analyst and a former member of the Indian government’s Policy Advisory Group, told The Epoch Times that the deal may not mean much.

“The much-hyped 2005 U.S.-India nuclear deal hasn’t led to a single reactor contract so far. That Trump’s impending India visit is likely to yield a Westinghouse-NPCIL MOU (not contract) may not mean much, given how nuclear power’s promise has faded globally.

“Skyrocketing construction costs, made worse by the post-Fukushima safety upgrades, and reliance on massive government subsidies are making nuclear power uncompetitive,” he said in an email.

Trump’s meeting with Modi on Feb. 24 and 25 will be the fifth time President Trump meets him in the last five months. The two sides are set to sign major defense deals and hold talks on defense, counter-terrorism, people-to-people contact, energy, and regional issues, according to the Asia News Network.