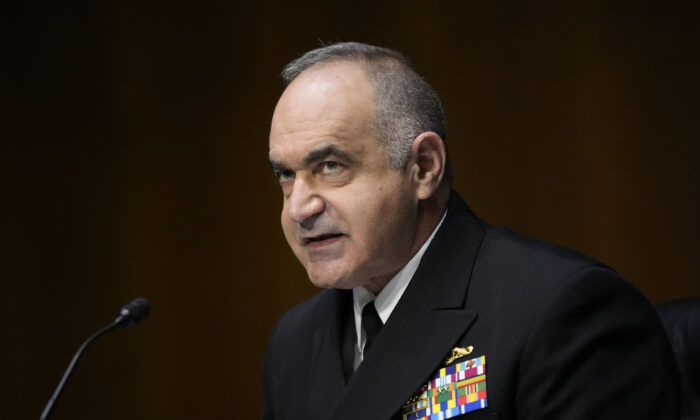 US Faces Potential ‘Cooperative Aggression’ From China, Russia: US Admiral

Adm. Charles Richard, head of U.S. Strategic Command, has expressed deep concern about potential “cooperative aggression” from China and Russia, now that the two bordering nations have deepened their ties by boasting a “no-limits” partnership.

“I have to deter all of them all of the time, which means every day, we’re thinking about their decision calculus, and what we have to do to influence so that basically, they say, ‘Not today.’”

Richard has long been sounding the alarm on China’s rapid modernization of its military capabilities. In August last year, he said the United States was “witnessing a strategic breakout by China,” describing the Beijing regime’s modernization of its nuclear and conventional forces as “breathtaking.” A month later, he formally informed the secretary of defense of his assessment.

In November 2021, the Pentagon warned that China might have at least 1,000 deliverable nuclear warheads by 2030.

When asked whether China would stop expanding its nuclear arsenal once it had that many warheads, Richard said the communist regime wouldn’t stop.

“I don’t know that we have any idea of what the endpoint and/or speed [are],” he said.

“When I first testified here, we were questioning whether or not China would be able to double that stockpile by the end of the decade. They’re actually very close to doing it on my watch. And I think we need to factor that into our calculations, as we think through what we need to defend ourselves.”

Richard reiterated a comment he made during a House hearing on March 1.

“Today, we face two nuclear-capable near-peers who have the capability to unilaterally escalate to any level of violence in any domain worldwide, with any instrument of national power at any time,” he said. “We have never faced a situation before like that in our history.”

China and Russia proclaimed their current partnership on Feb. 4, after a meeting between Russian President Vladimir Putin and Chinese leader Xi Jinping. The meeting culminated in a 5,000-word joint statement in which the two leaders said there would be “no ‘forbidden’ areas of cooperation” between their nations.

On March 7, China reaffirmed its strong relationship with Russia, as Chinese foreign minister Wang Yi referred to the two neighbors as “strategic partners” whose relationship is “rock-solid.”

Now, more than two weeks into the war in Ukraine, China has provided tacit support for Russia’s actions, by refusing to call Moscow’s attack an invasion and abstaining twice in United Nations votes.

Russia’s invasion has fueled speculation about the fate of Taiwan, and whether the Chinese Communist Party would take a cue from Russia and invade the self-governing island soon. The communist regime sees Taiwan as a part of its territory, even as the island is a de facto independent entity with its own liberal democratic government.

The issue of Taiwan also came up during the Senate hearing, when James Dickinson, the commander of the U.S. Space Command, was asked about how the U.S. military can prevent China from taking out U.S. satellite communications, if Beijing decided to launch a preemptive strike in space prior to an invasion against Taiwan.

“It all boils down to having a consistent stream of funding that will allow the Space Force and other services to provide the capabilities that I will need,” Dickinson responded.

Rep. Mike Gallagher (R-Wis.), in an interview with Fox News on March 6, said China’s refusal to condemn Moscow’s military actions stems from one simple fact: The communist regime “wants to do the same with Taiwan.”

“I fear that China will be emboldened by Putin’s invasion of Ukraine,” he said. “The Biden administration thought sanctions and tweets would be enough to deter, but they failed to apply the kind of hard power that would have deterred Putin from launching his war in the first place.

“If the Biden administration remains wedded to this strategy called integrated deterrence, which is just liberal code for cutting hard power, I fear deterrence will fail again in an even bigger stage, which is the conflict over Taiwan.”