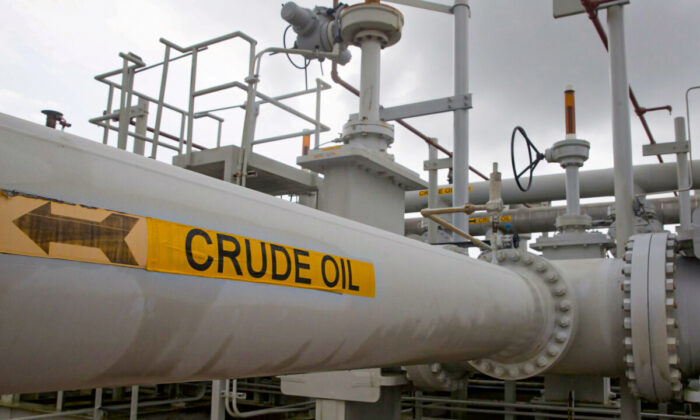 In total, the world’s largest emergency supply of crude oil stood at 497.9 million barrels, its lowest level since April 1986.

With the U.S. consuming close to 20 million barrels per day, based on the Energy Information Administration’s (EIA) 2021 estimate, the country still maintains a 25 days supply.

At this rate, the SPR will shrink to its lowest level in 40 years by the fall, as its supply is dwindling faster than the output of some medium-sized countries that are a part of the Organization of the Petroleum Exporting Countries (OPEC), including Algeria and Angola.

The petroleum reserve was established in 1975 following the 1973–1974 oil embargo. The U.S. government wanted to prevent future supply disruptions, so it initiated the world’s largest known emergency supply, with underground tanks being located in Louisiana and Texas.

According to the Energy Policy and Conservation Act, the president has the authority to order crude releases from the reserve if he declares “a severe energy supply interruption” that could threaten the economy or national security.

Some lawmakers have proposed restricting releases unless Congress approves legislation or a joint resolution.

The White House has been tapping into these stockpiles to help stabilize the global energy market and bring down oil prices. In November, Biden released 50 million barrels of crude from the reserves. Two months later, the administration authorized the release of more than 13 million barrels.

In March, the White House confirmed that it would release 1 million barrels per day of oil for six months, the largest-ever SPR reduction.

“The scale of this release is unprecedented: the world has never had a release of oil reserves at this 1 million per day rate for this length of time. This record release will provide a historic amount of supply to serve as [a] bridge until the end of the year when domestic production ramps up,” the administration said in a statement.

While the decision provided temporary relief to skyrocketing commodity prices, industry experts dismissed the move, arguing that it wouldn’t resolve energy’s structural imbalance that has been years in the making.

“There are many factors behind rising energy costs, from geopolitical volatility and supply chain constraints to policy uncertainty, and the American people deserve real solutions,” American Petroleum Institute (API) CEO Mike Sommers said in a statement. “[The release] may provide some short-term relief, [but] it is far from a long-term solution to the economic pain Americans are feeling at the pump.”

U.S. Chamber of Commerce’s Marty Durbin, who’s also the president of the Global Energy Institute, said the administration was misdiagnosing the problems, “one of which is their own reluctance to process permits.”

In response to growing concerns about a depleted reserve, the Department of Energy revealed plans to replenish emergency stocks. This fall, it will begin a buyback process to repurchase 60 million barrels of oil, or one-third of the six-month 180-million-barrel emergency release.

“The U.S. Strategic Petroleum Reserve, the largest emergency supply in the world, is a valuable tool to protect the American economy and consumers from supply disruptions—whether caused by emergencies at home or petrol-dictators weaponizing access to energy resources,” Secretary of Energy Jennifer Granholm said in a statement.

“As we are thoughtful and methodical in the decision to drawdown from our emergency reserve, we must be similarly strategic in replenishing the supply so that it stands ready to deliver on its mission to provide relief when needed most.”

Still, has this broader strategy paid off?

Since the announcement this past spring, West Texas Intermediate (WTI) crude oil prices have surged by more than 6 percent on the New York Mercantile Exchange.

Brent, the international benchmark for oil prices, also advanced by about 5 percent on London’s ICE Futures exchange. The national average for a gallon of gasoline has climbed by about 12 percent to $4.87, although it recently topped $5.

Despite being poised for a decline of about 3 percent in June, U.S. crude is still up by roughly 50 percent year-to-date. Although the White House is exploring multiple avenues, such as urging OPEC to open the taps and pushing gas stations to diminish the pain at the pump, the best solution is greater North American output, according to Tortoise Senior Portfolio Manager Rob Thummel.

“The best solution remains increasing oil and natural gas production from reliable supply sources like U.S. and Canada that will assist in balancing the global energy markets and reduce the geopolitical risk premium embedded in global oil and natural gas prices resulting in lower prices at the pump,” Thummel said during a recent TortoiseEcofin QuickTake podcast.