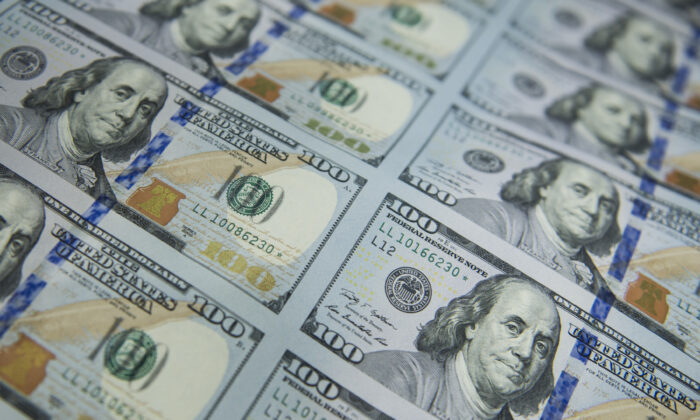 New $100 bills are applied with a serial number, a U.S. Federal Reserve seal, cut, and stacked at the U.S. Bureau of Engraving and Printing's Western Currency Facility in Fort Worth, Texas, on Oct. 11, 2013. (Brendan Smialowski/AFP via Getty Images)
Economy

US Economy Set to Grow Twice as Fast as Earlier Predicted: OECD

The United States’ economy is expected to grow twice as fast as earlier forecasts predicted, according to a new report, which rests its optimistic outlook on the huge dose of fiscal stimulus and accelerating vaccine rollout.

“The significant fiscal stimulus in the United States, along with faster vaccination, could boost U.S. GDP growth by over 3 percentage points this year, with welcome demand spillovers in key trading partners,” the Organization for Economic Cooperation and Development (OECD) wrote in its so-called interim March report, released on March 9 (pdf).

The OECD’s closely watched December report, one of two main economic outlook products bridged by the March 9 interim projections, had predicted that the U.S. economy would grow by 3.2 percent; the interim report raises estimates for economic output this year to 6.5 percent.

“Sizable risks remain,” the report cautions, however. Chiefly, slow progress in vaccine rollout and the emergence of new vaccine-resistant mutations of the CCP virus.

“Faster progress in vaccine deployment in all countries would enable restrictions to be lifted more quickly and enhance confidence and spending,” the OECD said.

“COVID is still the dominant driver of the world economic outlook,” Laurence Boone, the OECD’s chief economist, told reporters at a press briefing. She said that, despite the upgrade to economic projections, she remains “very concerned that we’re not doing enough to accelerate the recovery.”

While the fiscal support is “appropriate,” she said the pace of vaccinations isn’t fast enough to “consolidate the recovery,” and she urged haste.

“Stimulus without vaccinations won’t be as effective because consumers won’t go out doing normal things,” Boone said. “It’s the combination of health and fiscal policy that matters.”

The Centers for Disease Control and Prevention (CDC) says that as of March 9, more than 61 million people in the United States have received at least one dose of the COVID-19 vaccine, or about 18.4 percent of the population. Just over 32 million, or around 9.7 percent, have received two doses. New CDC guidance issued March 8 says fully vaccinated Americans can gather with other vaccinated people indoors without wearing a mask or social distancing.

Boone said the combination of vaccines, fiscal stimulus, and reopening of the economy in the United States is expected to “significantly boost the recovery as people are able to return to shop, dine, and travel.”

The $1.9 trillion relief bill that recently cleared the Senate provides up to $1,400 direct payments to most Americans, extended emergency unemployment benefits, as well as hundreds of billions for COVID-19 vaccines and treatments, schools, state and local governments, and ailing industries.

Republicans have opposed the bill, calling the American Rescue Plan excessive and wasteful.

Senate Minority Leader Mitch McConnell (R-Ky.) said the package is too big at a time when the virus is showing signs of easing and the economy is poised to come “roaring” back.

And rather than working across the aisle toward unity, as Biden promised, McConnell said Democrats are “ramming through what they call ‘the most progressive domestic legislation in a generation,'” citing the White House chief of staff.

“They explained their intent very clearly: to exploit this crisis as ‘a tremendous opportunity to restructure things to fit our vision,’” McConnell said.

The American Rescue Plan is the first COVID-related relief bill that has had zero support from Republicans in the House or Senate.