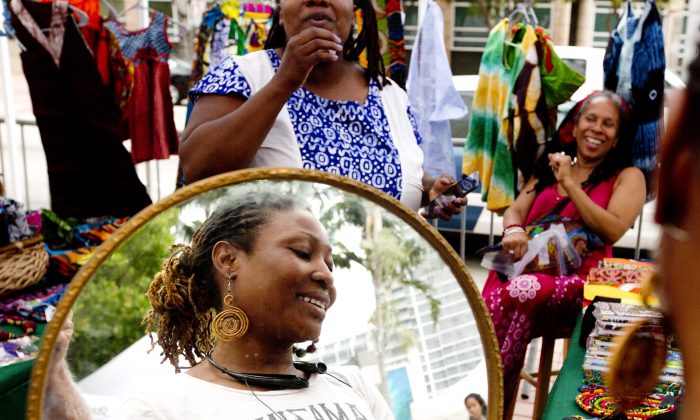 Judith Jean-Noel looks in a mirror as she shops for ear rings at the Monday night green market in downtown Miami on June 8, 2015. Fortunately for the U.S. economy, consumers have kept spending this year, a trend that analysts expect to continue. This is a vital factor because consumers account for roughly 70 percent of economic activity. (AP Photo/J. Pat Carter)
Business & Economy

WASHINGTON—The U.S. economy has resembled an especially dizzying roller-coaster ride this year, with a hurtling dive followed by a steep climb leading to yet another slide.

On Thursday, when the government issues its first of three estimates of growth in the July-September quarter, it’s expected to show an economy slumping from global weakness and reduced corporate stockpiling—but poised to rise again.

Economists’ consensus forecast, according to FactSet, is that the economy eked out just a 1.7 percent annual growth rate last quarter, a subpar pace by any standard.

“We got a lot of weakness during the summer from a widening of the trade deficit and a drawdown of inventories,” said Mark Zandi, chief economist at Moody’s Analytics. “But I think the consumer will lead the way to stronger growth in the fourth quarter.”

The year began on a rocky note. A severe winter and West Coast port disruptions combined to essentially stall the economy. Overall growth, as measured by the gross domestic product, slowed to a barely discernible 0.6 percent annual rate in the January-March quarter.

Then, as the snow melted and the West Coast ports resumed full operations, growth jumped to a 3.9 percent rate in the April-June quarter.

But true to the pattern this year, economist think the summer slowdown will be followed by an acceleration in the final three months of the year. For the year, after all the ups and down, the economy is expected to expand around 2.3 percent, close to 2014’s modest 2.4 percent growth.

Here’s a look at the negative and positive forces at work in the economy:

China rocked financial markets in August with an unexpected devaluation of its currency. The move raised fears that the world’s second-largest economy was slowing more than anyone had thought.

China’s isn’t the only country in trouble. Canada, America’s largest trading partner, is in recession. And growth in Europe and Japan continues to disappoint. All that overseas weakness has hurt U.S. exports, especially because a higher-value dollar has made American-made products more expensive abroad.

The slump in export sales and the stronger dollar, which makes imports cheaper for Americans, has had an unfortunate effect: It’s created a buildup of unsold goods that U.S. businesses have been trying to work down to more manageable levels. This inventory reduction, JPMorgan estimates, cut nearly 2 percentage points from annual growth in the July-September quarter. Yet this very reduction in supplies should set the stage for stronger growth in the final three months of the year as businesses restock.

Fortunately for the U.S. economy, consumers have kept spending this year, a trend that analysts expect to continue. This is a vital factor because consumers account for roughly 70 percent of economic activity.

Households are benefiting from solid employment gains, which have driven the unemployment rate to a seven-year low of 5.1 percent. Though pay growth has remained modest, more people working means more income to spend. Many economists think spending will be the leading factor to support growth in the October-December.

Economists generally think the drag from reduced inventory building is easing in the current quarter. Most also think the weaker job growth of the past three months will prove temporary and that hiring will accelerate in the final months of this year to the pace that preceded the summer drop-off.

If so, that would put consumers in more of a mood to spend during the holiday shopping season. Also helping will be the renewed decline in energy prices, which is giving consumers more money to spend on other goods and services.

Macroeconomic Advisers predicts that growth in the October-December quarter will rebound to an annual rate of around 2.7 percent. Zandi is even more optimistic: He foresees annual growth of around 3.5 percent this quarter, with the momentum carrying into 2016.