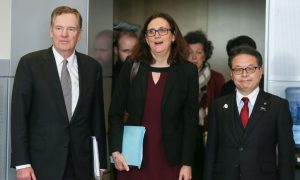 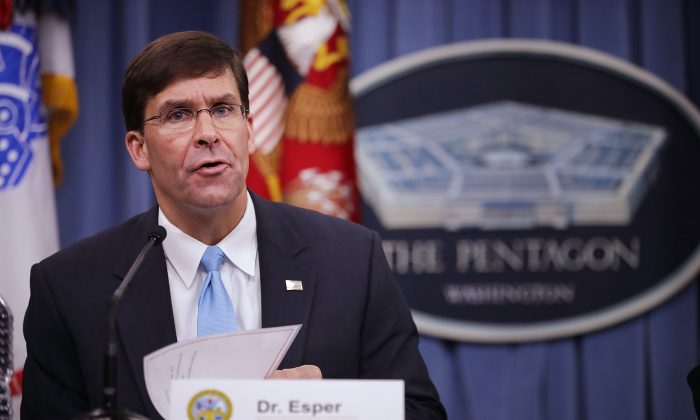 U.S. Army Secretary Mark Esper announces that Austin, Texas, will be the new headquarters for the Army Futures Command during a news conference at the Pentagon in Arlington, Virginia on July 13, 2018. (Chip Somodevilla/Getty Images)
US-China Relations

US Defense Chief Esper Cautions Europe to be Wary of China

“The more dependent a country becomes on Chinese investment and trade, the more susceptible they are to coercion and retribution when they act outside of Beijing’s wishes,” Esper said in a speech at the Royal United Services Institute, a think tank.

Esper’s assertion that China is seeking to expand its influence at the expense of others has been a common U.S. government refrain for years, which often center on China’s efforts to militarize disputed territory in the South China Sea and its vast trade surplus with the U.S.

“I would caution my friends in Europe—this is not a problem in some distant land that does not affect you,” he said.

In a similar vein, Esper blasted Russia for arms control violations and for aggression in Europe, including its annexation of Crimea in 2014 and what he called Moscow’s continued aggression in eastern Ukraine. In a question-and-answer session after his prepared remarks, Esper said Russian ground-based cruise missiles aimed at Europe are “probably nuclear-tipped.”

In his prepared remarks, Esper was making the case for the Trump administration’s argument that the West must do more to counter what he called efforts by China and Russia to “disrupt the international order” to gain advantage.

It was the first major policy speech by Esper since becoming defense secretary in July. In tone and substance, the remarks showed Esper subscribes to what has become a common theme in Washington, namely that China is the greatest long-term threat to global security.

“For anyone who wonders what a world dominated by Beijing might look like,” he said, “I would argue all you need to do is look at how they treat their own people, within their borders.”

Esper cited as an example China’s treatment of minority Uyghurs since the ruling Communist Party in 2016 launched what it calls a campaign against ethnic separatism and religious extremism in the western region of Xinjiang.

An estimated 1 million Uyghurs have since been detained in internment camps and prisons across the region, and advocacy groups say that includes more than 400 prominent academics, writers, performers and artists. Critics say the government is targeting intellectuals to dilute or even erase Uyghur culture, language and identity.

“It is increasingly clear that Russia and China want to disrupt the international order by gaining a veto over other nations’ economic, diplomatic and security decisions,” Esper said.

Esper’s speech amounted to a statement of his top strategic priority: to make China and Russia the main focus of U.S. defense planning, shifting from the insurgent wars of recent decades in the Middle East and Afghanistan.