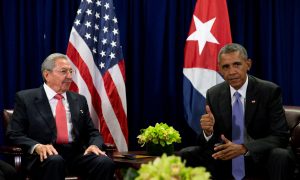 US, Cuba Leaders Meet for 2nd Time in This Year
0 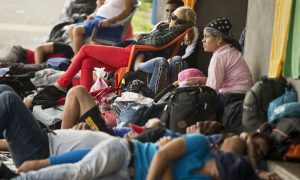 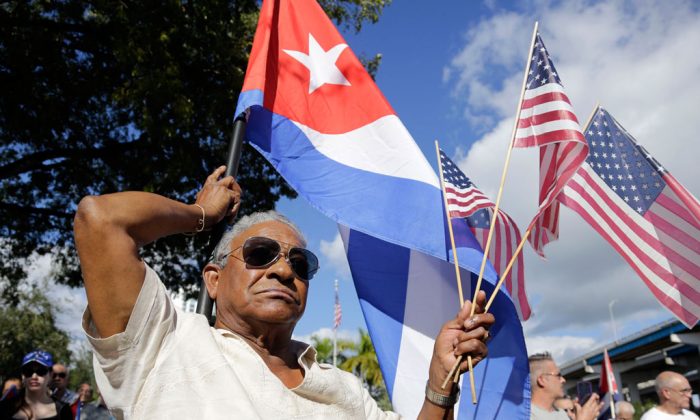 Evilio Ordonez holds Cuban and American flags during a protest against President Barack Obama's plan to normalize relations with Cuba, Saturday, Dec. 20, 2014, in the Little Havana neighborhood of Miami. (AP Photo/Lynne Sladky)
US

HAVANA—The United States and Cuba are on the verge of a deal to restore regular airline flights, jumpstarting economic relations that have languished despite a year of rapid progress on the diplomatic front, Cuba’s top negotiator said on the eve of the anniversary of detente between the Cold War foes.

The deal being thrashed out at marathon talks in Washington would open the way for U.S. airlines to negotiate with Cuba’s government for routes that could bring thousands more visitors a day to the island. The reestablishment of commercial U.S. flights to Cuba after half a century would be the biggest business development since the two countries began normalizing relations last year.

Teams meeting in Washington “have made important advances in negotiating a memorandum of understanding on establishing regular flights between Cuba and the United States, and shortly they will be ready to announce a preliminary agreement on this issue,” Josefina Vidal, head of North American affairs for Cuba’s foreign ministry, told reporters in Havana.

The United States and Cuba publicly say they’re delighted with the state of diplomatic relations a year after Presidents Barack Obama and Raul Castro declared the end to more than 50 years of official hostility. The two countries have reopened embassies in Havana and Washington; agreed to a pilot program restarting direct mail service; signed two deals on environmental protection; and launched talks on issues from human rights to compensation for U.S. properties confiscated by Cuba’s revolution.

The U.S. Secretaries of State, Commerce and Agriculture and the Cuban-born Deputy Secretary of Homeland Security have all made official visits to start discussions on unsexy but vital technical matters like produce inspection and port regulations.

Sports and cultural activity is heating up too. Havana has been swamped by U.S. celebrities. Several music promoters are jostling to hold the first major U.S. pop concert in the capital early next year. Major League Baseball stars including Cuban-born defectors Yasiel Puig and Jose Abreu were warmly welcomed by the Cuban government this week on a goodwill trip meant to pave the way for spring training games in Cuba in 2016.

But there has been virtually no progress on business ties, a major part of Obama’s new policy on Cuba. When he unveiled that policy on Dec. 17, 2014, Obama delivered a glowing vision of American visitors using debit and credit cards made possible by new banking links. U.S. companies would export a wide range of goods including telecommunications equipment.

Almost none of that has happened.

Sprint and Verizon have signed roaming deals with Cuba’s state telecommunications company that benefit a small class of well-heeled American travelers. The online home-sharing service Airbnb has started operations in Cuba but hasn’t allowed non-Americans to book lodging, making it irrelevant for the majority of travelers who are coming from Europe and Canada.

“On the political and diplomatic plane, and in bilateral cooperation, we’ve seen important progress,” Vidal said. “In contrast I have to say that in the area of economy and commerce the results are barely visible.”

U.S. travel from Cuba is up more than 50 percent from last year even though flying today requires wrangling with charter airlines that are expensive and difficult to book. Travelers from Cuba must brave long, chaotic lines to buy paper tickets. In the U.S., they are forced to email documents and payment information back and forth with an agent in the absence of online booking.

The return of commercial flights appears certain to create a surge in travel that would place heavy strain on Cuba’s already overstrained tourist infrastructure. Hotels and private hostals are booked for months.

The U.S. has expressed disappointment with what it calls Cuba’s unwillingness to cooperate with executive actions such as allowing U.S. exports to the Cuban private sector and sales of equipment to the Cuban state telecommunications company. Vidal said much of the blame lay with the Obama administration’s unwillingness, so far, to take bolder steps to loosen the U.S. trade embargo on Cuba.

“There are very few things that, under the law, the president definitely can’t change,” Vidal said, calling on Obama to allow the Cuban government to use dollars in international transaction and export goods to the U.S., among other measures.

U.S. companies trying to do business in Cuba say bureaucrats have welcomed their proposals in friendly face-to-face meetings but months later there still is no concrete “yes” or “no.”

In the U.S., banks afraid of running afoul of the embargo have been blocking legal Cuba-related transactions at rates equal to or higher than before Obama’s announcement. And U.S. businesses eager to launch projects in Cuba say federal regulators are meeting many requests for licenses with confusion or silence.

Cuban officials have declared themselves ready to do work with Oggun, an Alabama-based two-man firm that wants to build affordable, easy-to-repair tractors mostly for private Cuban farmers. The company believes its plans comply with both the letter and spirit of Obama’s new policy.

They say they have gotten encouraging words from the State Department but the Treasury Department’s financial regulators have frozen them in place.

“All we get is, ‘your application is still pending,”” Oggun co-founder Horace Cleber said. “It’s been six months that it’s been in the process.”