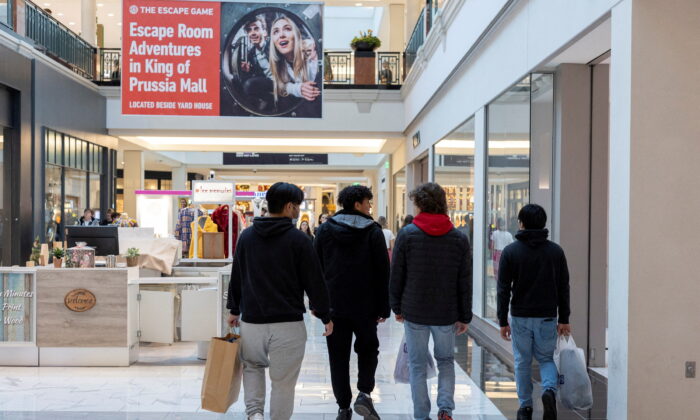 People carrying shopping bags walk inside the King of Prussia shopping mall, as shoppers show up early for the Black Friday sales, in King of Prussia, Pa., on Nov. 26, 2021. (Rachel Wisniewski/File Photo/Reuters)
Inflation

U.S. consumer sentiment in early February unexpectedly declined to its lowest level in more than a decade, due to fears that rising levels of inflation would persist in the near term, according to a survey from the University of Michigan.

The university report, which was released on Feb. 11, saw the consumer sentiment index tumble to 61.7 in February, from 67.2 percent in January, hitting its lowest level since October 2011.

The economists in the survey had expected the index to rise to 67.5 percent.

The news followed a January report showing consumer prices recorded their largest annual increase in 40 years at 7.5 percent, which prompted markets to price in a 50 basis points interest rate hike from the Federal Reserve for March.

The current economic conditions index slid to 68.5 in February from 72 percent in January, the lowest since August 2011, while the index of consumer expectations tumbled to 57.4 from 64.1 percent.

However, analysts believe the declining consumer sentiment is unlikely to derail spending against the backdrop of excess savings and a recovering labor market.

“The recent declines have been driven by weakening personal financial prospects, largely due to rising inflation, less confidence in the government’s economic policies, and the least favorable long term economic outlook in a decade,” said Richard Curtin, Surveys of Consumers chief economist at the University of Michigan.

Many Americans are increasingly pessimistic about their buying power, as positive wage gains have not kept pace with the rise in the cost of living.

The consumer sentiment index is especially sensitive to energy prices and the stock market.

Twenty-six percent of respondents expect their financial prospects to worsen as costs for food, housing, and electricity have gone up, the highest figures since 1980 as inflation takes a toll on household balance sheets.

“The impact of higher inflation on personal finances was spontaneously cited by one-third of all consumers, with nearly half of all consumers expecting declines in their inflation-adjusted incomes during the year ahead,” said Curtin.

“In addition, fewer households cited rising net household wealth since the pandemic low in May 2020, largely due to the falling likelihood of stock price increases in 2022,” he continued.

The declines according to the report were entirely among households with incomes of $100,000 or more, which plunged by 16.1 percent and may reflect falling stock market prices.

Poor government economic policies were cited by 51 percent of respondents, the highest share since 2014.

A public lack of confidence across party lines is putting a dent in the Biden administration’s agenda, as Americans are feeling less confident in the White House’s ability to manage the crisis, according to the report.

Meanwhile, American employers added nearly half a million jobs in January, while states across the country have begun lifting mask mandates as infection counts drop.

Reuters, RTTNews, and Bloomberg News contributed to this report.