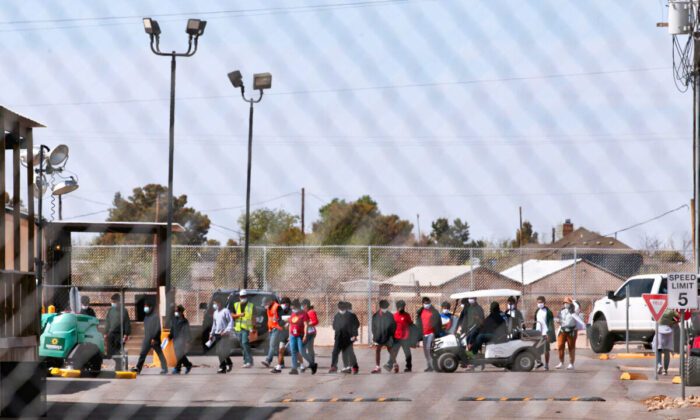 Unaccompanied child immigrants are seen at the site of a former oil field workers camp which is being used as a temporary housing facility in Midland County, Texas on April 8, 2021. (Paul Ratje/Reuters)
US News

US Considering Deferring Deportation for Some Illegal Immigrant Minors Over Abuse, Neglect Concerns

U.S. Citizenship and Immigration Services (USCIS) on Monday said they are considering deferring the deportation of illegal immigrant children who are subject to state juvenile court proceedings related to “abuse, neglect, abandonment” to better protect them.

The policy update will expand the number of children in the United States who are eligible for Special Immigrant Juvenile (SIJ) status.

SIJ, which was first established by Congress in 1990, allows illegal immigrants under the age of 21 to apply for lawful permanent residency in America if a court determines they need protection and that returning to their home countries would not be safe.

According to USCIS, the SIJ classification is available to noncitizen children who are “subject to state juvenile court proceedings related to abuse, neglect, abandonment, or a similar basis under state law.”

The new policies would provide immigrant minors who are the victims of such abuse or neglect with an easier path toward receiving green cards, according to Reuters.

However, USCIS said in a statement that such a deferred action would not necessarily result in obtaining lawful status in the United States and does not result in eligibility for employment.

Updates to the policy will be effective as of May 6, and deferment will be considered on a case-by-case basis, officials said. If deferment is granted, it will be valid for a period of four years.

USCIS noted that updates to the policy were in part due to the unavailability of visa numbers.

“Due to ongoing visa number unavailability, the protection that Congress intended to afford SIJs through adjustment of status is often delayed for years, leaving this especially vulnerable population in limbo,” USCIS said.

“Therefore, USCIS is updating its policy guidance to provide that USCIS will consider granting deferred action on a case-by-case basis to non-citizens classified as SIJs who are ineligible to apply for adjustment of status solely due to unavailable immigrant visa numbers.”

USCIS added that “congress likely did not envision that SIJ petitioners would have to wait years before a visa became available, since, for many years after the implementation of the program, SIJs did have visas immediately available” and that the updates to the SIJ program, “furthers congressional intent to provide humanitarian protection for abused, neglected, or abandoned noncitizen children” who court officials have determined are safer staying in the United States.

The updates adopted on Monday are also designed to streamline the process for applicants and make it clear what type of documents they need to prove whether or not they are eligible for SIJ status. They also include updated regulations to clarify that individuals who are younger than 21 can apply for the program.

Since 2010, more than 130,000 applications have been approved under the special immigrant juvenile program, according to Reuters.

However, critics believe the program makes it too easy for non-citizens to obtain a green card and encourages more migration to the United States at a time when the country is already experiencing an influx of immigrants.

Under the Trump administration, USCIS increased requests for documentation and many of the applicant’s petitions were denied if they were over 18-years of age because state family courts determined they didn’t have jurisdiction over such cases.

“Today, we are taking action to help immigrant children in the U.S. who have been abused, neglected, or abandoned and offer them protection to help rebuild their lives,” USCIS Director Ur Jaddou said in a statement on Monday. “These policies will provide humanitarian protection to vulnerable young people for whom a juvenile court has determined that it is in their best interest to remain in the United States.”