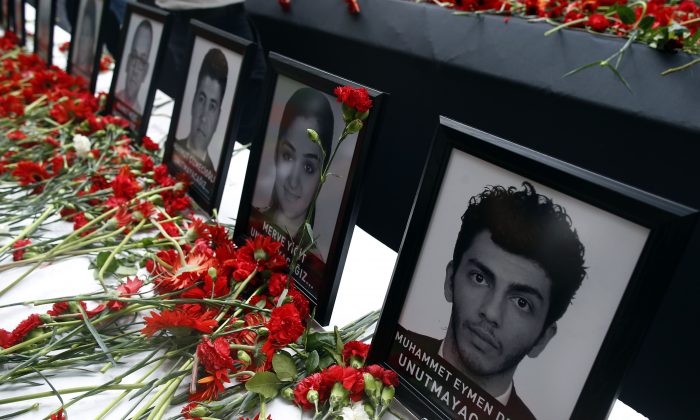 Photographs of victims were displayed among carnations as family members, colleagues and friends gather for a memorial ceremony at the Ataturk Airport in Istanbul, Thursday, June 30, 2016. (AP Photo/Emrah Gurel)
Europe

Turkish and Swedish media have also identified Chatayev as the organizer, although Turkish authorities have not confirmed his involvement. Sabah newspaper, which is close to the government, said police had launched a manhunt to catch the alleged mastermind.

McCaul said it is unclear where Chatayev is, but he is known to have served as a top lieutenant in the Islamic State group’s war ministry.

Although no group has claimed responsibility, the IS group is the main suspect for the airport attack. The group has boasted of having cells in Turkey, among other countries.

Authorities said the three suicide bombers in the attack — which echoed the carnage earlier this year at the Brussels airport — were from Russia and the Central Asian nations of Uzbekistan and Kyrgyzstan. They did not provide further details on their identities

Thirteen people, suspected of possible links to the attack, were detained in raids in three Istanbul neighborhoods on Thursday, officials said. Haber Turk newspaper said on its online edition that 11 more suspects — all of them foreign nationals — were detained in a separate raid on a house in Istanbul early on Friday. A government official in Istanbul could not immediately confirm the report.

The IS group, which has used Turkey to establish itself in neighboring Syria and Iraq, has repeatedly threatened Turkey in its propaganda, and the NATO member has blamed IS for several major bombings in the past year in both Ankara and Istanbul.

Turkey’s interior minister said the explosives used were a mix of RDX, TNT and PETN that were “manufactured,” which chemist and explosives expert at University of Rhode Island, Jimmie Oxley, described as being military-grade, raising the question of how the attackers obtained the bombs.

A key partner in the U.S.-led coalition against the Islamic State group, Turkey also faces security threats from the Kurdish rebels who are demanding greater autonomy in Turkey’s southeast region and from ultra-left radicals. Kurdish rebels have carried out numerous car bomb attacks in the past year, including an attack Feb. 17 in Ankara that killed 39 people, and another devastating bombing in the capital in March.

An official said Friday that security forces have killed the mastermind of the Feb. 17 attack.

Mehmet Sirin Kaya was killed in the town of Lice in the mainly Kurdish province of Diyarbakir, the official said. He spoke on condition of anonymity in line with government regulations.

The attack against military personnel was claimed by an offshoot of the Kurdistan Worker’s Party, or PKK, which Turkey considers a terrorist organization.