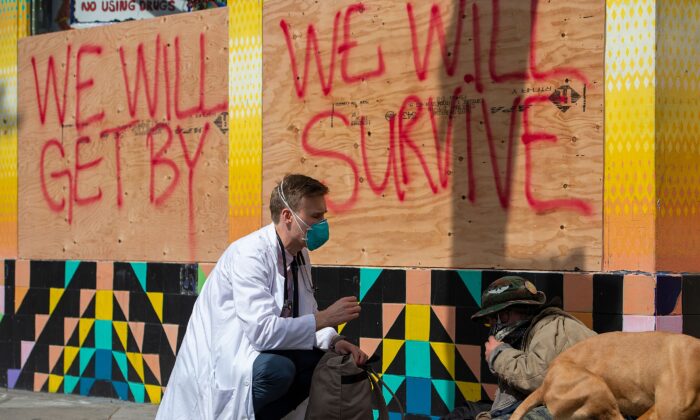 The United States recorded more than 1,000 deaths from the CCP virus in the past 24 hours, pushing the total past 5,000, according to data provided by the Johns Hopkins University database.

The spike in deaths comes as President Donald Trump and White House health officials warn of a “very painful” two-week period in which cases and deaths are expected to increase. Dr. Anthony Fauci, one of the lead members of the White House Coronavirus Task Force, has said that more than 200,000 Americans could die from the Chinese Communist Party (CCP) virus even as current restrictions remain in place.

The Johns Hopkins CCP virus database—using sources from the World Health Organization, the U.S. Centers for Disease Control and Prevention, and the European CDC—shows that the United States hit around 1,040 cases on Wednesday night, USA Today reported. As of Thursday, more than 200,000 people have been infected with the virus in the United States.

“Our country is in the midst of a great national trial,” President Donald Trump said in a White House briefing on Wednesday. “We’re going to go through a very tough two weeks.”

Gov. Andrew Cuomo said during a Wednesday press conference that the state could see as many as 16,000 deaths after citing one model that shows the trajectory of the virus.

“If you believe these numbers, 16,000 deaths in New York, that means you’re going to have tens of thousands of deaths outside of New York,” he said. Some experts say that “it’s a New York problem today” but “tomorrow, it’s a Kansas problem and a Texas problem and a New Mexico problem,” Cuomo said.

“Now is the crunch time for us to lessen the peak, to make the bullseye smaller so we don’t overrun our health care system,” Georgia Gov. Brian Kemp said, reported FOX 5. He added that the next three weeks were critical for Georgia and that residents needed to “hunker down.”

Michigan Gov. Gretchen Whitmer signed an executive order on Wednesday extending the state of emergency and formally declaring a state of disaster over the CCP virus. More than 330 people have died so far in the state.

“Since Michigan announced our first confirmed cases of COVID-19 three weeks ago, we have taken some of the most aggressive measures in the country to mitigate the spread of the virus and protect Michigan families,” said Whitmer in a press release.