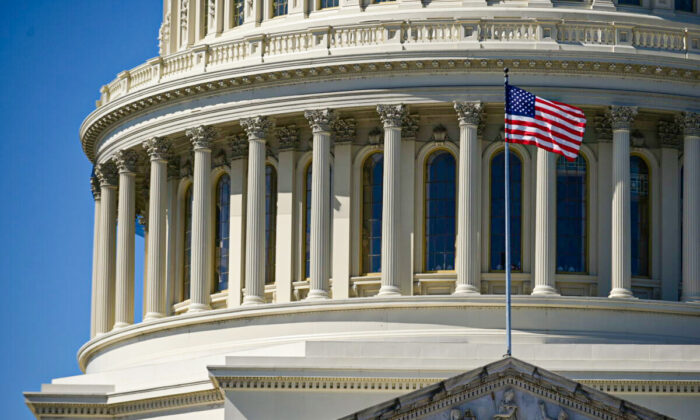 The U.S. Capitol in Washington on March 8, 2021. (Erin Scott/Reuters)
District of Columbia

A U.S. Capitol Police (USCP) officer has been suspended after firing his gun in the break room of the Cannon House Office Building in Washington on Tuesday.

“The Capitol Police’s Office of Professional Responsibility (OPR) is investigating the discharge of a USCP weapon inside a break room in the Cannon Office Building. The officer has been suspended while OPR investigates the incident,” USCP said in a statement obtained by The Epoch Times.

The circumstances surrounding the weapon discharge are unclear. An agency spokesperson told Fox News Digital that they were unable to say more as it was an open investigation.

The incident occurred one day after contract security officers began work with USCP on May 2 to help plug staffing shortages, according to a letter from the Capitol Police Board to lawmakers and staff obtained by CQ Roll Call.

Those security contractors would reportedly be unarmed and wear gray dress pants and a navy blue blazer as their uniform.

USCP would not say who the officer was, but confirmed they were not hired to fill workforce shortages, while noting they couldn’t say more as it was part of an open investigation.

The incident, which reportedly occurred at around 8:30 a.m., is the latest in a series of missteps and miscommunications by the USCP that have damaged public trust in the agency.

Last month, the agency ordered the evacuation of the U.S. Capitol after an “unidentified plane was spotted within seconds” in restricted airspace.

The single-engine plane was later determined to be a military flight by the Golden Knights Parachute Team for Military Appreciation Night at Nationals Park, according to the agency.

The alert from the USCP sent congressional staffers fleeing from the Capitol and legislative building at around 6:30 p.m.

The FAA said it was reviewing the communications breakdown.

“Every week the USCP is made aware of hundreds of authorized flights in the restricted airspace. It is extremely unusual not to be made aware of a flight in advance,” the USCP said in a statement on April 21.

“As soon as it was determined that we were not given advanced notice of an approved flight, our officers followed USCP policies and procedures and immediately led everyone safely out of the Congressional buildings. Seconds matter.”

The USCP Intelligence Division also came under fire after Rep. Troy Nehls (R-Texas) alleged that his office was one of several GOP offices that had been illegally entered and searched by the Capitol Police officers.

“On Nov. 20, 2021, Capitol Police entered my office without my knowledge and photographed confidential legislative products protected by the Speech and Debate clause enshrined in the Constitution, Article 1 Section 6,” Nehls said in a thread on Twitter on Feb. 9.

Nehls alleged that, two days later, three intelligence officers dressed like construction workers illegally entered his office again while he was in the House, and questioned a staffer about the “contents of a photograph taken illegally two days earlier.”

The USCP has also faced criticism over their preparedness surrounding the Jan. 6, 2021, Capitol breach, which some people have described as an “insurrection.”

Michael Bolton, the now-retired USCP inspector general who investigated the agency’s response to the Capitol breach, found the agency had “failed to disseminate relevant information obtained from outside sources” regarding plans for the events, QC Roll Call reported.