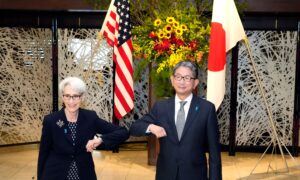 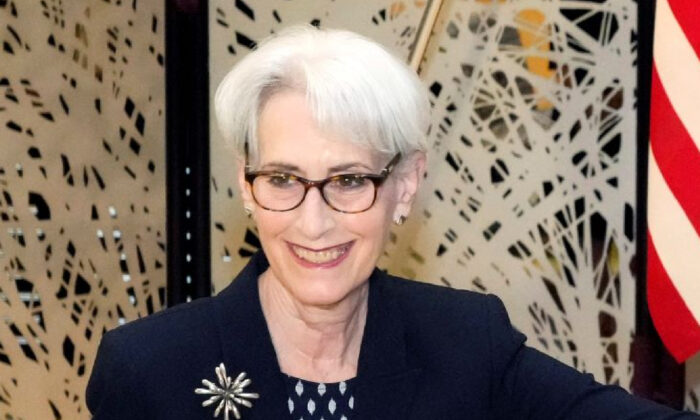 US Calls on China to Be a Responsible Power

BEIJING—A senior U.S. diplomat called on China, as a responsible global power, to rise above their differences and work with the United States on difficult global issues such as climate change and the COVID-19 pandemic.

Deputy Secretary of State Wendy Sherman, speaking in an interview with The Associated Press after talks on July 26 with Foreign Minister Wang Yi and Vice Foreign Minister Xie Feng, also said the United States welcomes vigorous economic competition with China but does not want it to veer into conflict.

China has bristled at American criticism on issues from human rights to its territorial ambitions and said repeatedly that the United States cannot expect cooperation while also suppressing China’s development, a charge that Sherman denied.

“There are some things that rise above specific differences that are the global responsibility of great powers,” Sherman said in a phone interview shortly after she wrapped up successive meetings with Xie and Wang in the Chinese city of Tianjin.

The meetings were the second face-to-face talks between top diplomats of the two countries since President Joe Biden took office in January, coming four months after testy exchanges between Secretary of State Antony Blinken and veteran Chinese diplomat Yang Jiechi in Anchorage, Alaska, in March.

Sherman, serving in the job since April, described the meetings as another step in the process of trying to work through critical issues with China.

“We will see whether, in fact, there’s follow up and we are able to move another step,” she said. “There’s no way to know in the early stages of building this relationship whether we will get to all the places that we hoped for.”

She said they had frank conversations on issues that divide them, ticking off a long list of United States concerns including what she called “the crimes against humanity” toward Muslims in China’s Xinjiang region, the clampdown on democracy in Hong Kong, China’s use of its economic size to pressure others, and its “aggressive actions” around Taiwan and in the South and East China Seas.

Sherman also pressed for the release of some Americans and Canadians detained in China, saying “people are not bargaining chips,” and raised concern about pressure on foreign journalists in China. China has tried two Canadians on national security charges in apparent retaliation for Canada’s arrest of a Chinese Huawei executive wanted in the U.S.

Xie accused the United States of trying to contain China’s development and said it should change course, embrace fair competition, and work with China on the basis of mutual respect and peaceful coexistence, according to a Foreign Ministry summary of his remarks. China calls criticism of its policies in Xinjiang, Hong Kong, and Taiwan interference in its internal affairs.

Sherman said the U.S. welcomes vigorous competition and believes it is important for China to grow and better the lives of its people, but in a way that is in accord with international rules and does not diminish any other country.

“We do expect … them to understand that human rights are not just an internal matter, they are a global commitment, which they have signed up for” under the U.N. Universal Declaration on Human Rights, she said.

Sherman, a Democrat who previously worked on North Korea and Iran talks in the Clinton and Obama administrations, said that China and the U.S. could work together on climate, anti-narcotics efforts, and regional issues such as North Korea, Iran, Afghanistan, and Burma (also known as Myanmar).

Each side shared concerns and issues that they hope can be resolved, she said. “I hope that we see those resolutions for the sake of many people whose lives and futures depend on it. But we will have to see.”