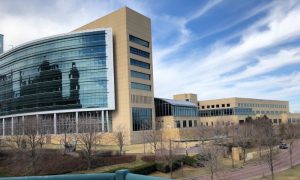 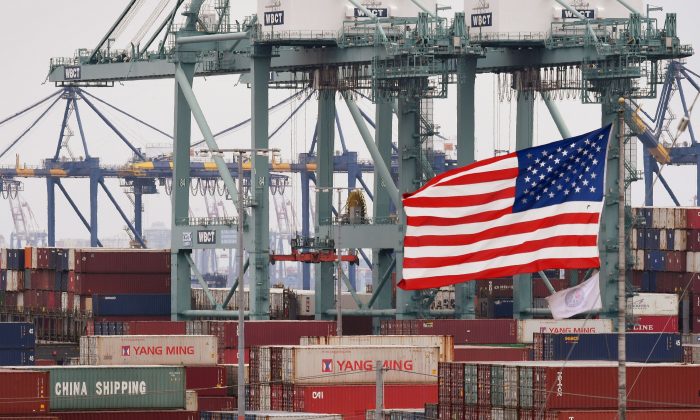 International shipping containers beside a U.S. flag at the Port of Los Angeles in Long Beach, Calif., on May 14, 2019. (Mark Ralston/AFP/Getty Images)
US News

A new business cycle report shows that despite battling headwinds, the American economy presses forward with grit, and there are good reasons for optimism.

Nick Reece, senior financial analyst and portfolio manager at Merk Investments, and author of the report told The Epoch Times in a statement that the economy is showing improvement and the probability of a near-term recession is low.

“Incoming information supports the view that we are in the process of coming out of a mid-cycle slowdown,” Reece said, adding that “the U.S. business cycle picture near-term is more positive than negative.”

The business cycle, also known as the economic cycle, is the up and down movement of gross domestic product (GDP) around its long-term growth trend.

Recession, or prolonged economic contraction, is generally understood to be when GDP dips below zero for two successive quarters. The U.S. economy is currently in its 11th year of a record-setting uninterrupted expansion.

The most recent GDP number came in at 2.1 percent in the final quarter of 2019, according to official figures from the Commerce Department, by most accounts a respectable showing.

The current GDP growth forecast for the first quarter of 2020 is around 2.5 percent, Reece noted in the report.

‘No Reason Why It Can’t Go On’

Federal Reserve Chair Jerome Powell on Wednesday reiterated his confidence in the U.S. economic outlook, even as he said he expected some drag “soon” from China’s new coronavirus epidemic.

U.S. wages are now growing at about a 3 percent annual pace, the unemployment rate is 3.6 percent, and job growth has more than kept up with an increase in the workforce.

“There is nothing about this economy that is out of kilter or imbalanced,” Powell insisted.

Still, Powell also said the Fed is keeping close tabs on the deadly coronavirus epidemic that has broken out in China and which he said will cause adverse economic spillover.

“We do expect that there will be some effects” on the U.S. economy, Powell said, adding that he expects to begin seeing these reflected in economic data “relatively soon.”

Factory shutdowns and travel restrictions aimed at containing the virus’ spread within China and to the rest of the world are expected to disrupt supply chains.

“Given the size of China’s economy and the measures put in place to contain the coronavirus, I expect a near-term negative impact on the global economy,” Reece said. “Historically, events like SARS, Ebola, and Fukushima tend to have a negative economic impact but are not dominant factors behind business cycles.”

“On balance, based on the data and frameworks presented (which inevitably may not capture all possible risk factors in real-time), it seems more likely than not that the expansion continues in the coming several months,” he added.

“Based on my checklist approach, the U.S. business cycle picture near-term is more positive than negative,” Reece said.

The report authored by Reece considers a range of indicators, including jobs and housing measures, as well as more complex leading frameworks that try to peer further ahead and predict future moves in the business cycle.

“All the presented charts and concepts are somewhat inter-related, as is the economy in general. The idea is to have some different data points to cross-reference,” Reece explained. “No one indicator should be looked at in isolation.”

“The 3-month moving average of job gains is 211,000, overall a strong level,” Reece said, referring to the so-called “non-farm payrolls” figures tracked by the Labor Department.

“The unemployment rate ticked up but on the back of increasing labor force participation, which is a healthy sign,” Reece added.

New building permits, which are long leading indicators, are now near cycle highs in the United States.

Georgia Bruggeman, Founder, and CEO at Meridian Financial Advisors, told The Epoch Times in a statement that new building permits are a go-to leading indicator for anticipating downturns.

“New housing requires a huge amount of resources in terms of lumber, copper, steel, glass, new appliances, new furniture,” Bruggeman explained. “A meaningful drop in this activity will hit the economy before we actually go into recession.”