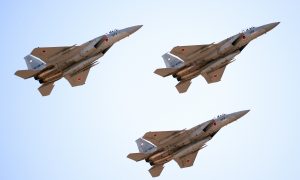 US B-52 Bombers Appear in Chinese Military Training Game

In an article entitled “Sword to cut off the head of devils!” the website of China’s state-run newspaper Global Times showed a screenshot with a Chinese soldier pointing a rocket launcher at two B-52 bombers flying overhead. The screenshot is from the latest update of “Glorious Mission,” the official training video game of the People’s Liberation Army, on a level that takes place on the contested Senkaku Islands.

The two B-52 bombers in the game are likely a reference to the two B-52 bombers the U.S. Air Force flew over the region on Nov. 26 after China declared an air defense zone over international waters in the East China Sea. The move was hailed as an act of defiance against growing Chinese aggression.

Glorious Mission was originally called “Glorious Revolution,” when it was first released as a training tool for the Chinese military. It was later made available to the Chinese public and is heavily laden with propaganda for the ruling Chinese Communist Party .

While the game’s level that allows members of the Chinese military to fight the Japanese on the Senkaku Islands was announced in July, the scene of B-52 bombers flying overhead appears to be a recent addition. The two planes are also not the first to represent American forces in the game. From its initial release, the game featured enemy troops with uniforms and vehicles of the United States and its allies.

The Global Times story explains the virtual training mission in excited detail. It begins by painting a verbal scene of the Japanese invasion of China during World War 2, then casts the dispute over the Senkaku Islands in the same light.

It says, translated from Chinese, that in “the setting sun, on the beach beautiful and bustling, greedy Japanese coveted this piece of paradise” and “attempt to plunder our precious cultural heritage.”

It then briefly explains the player’s role in the game, where they’re challenged to defeat the Japanese and “deport the invaders.”

The Senkaku Islands, part of the Ryukyu Island chain, have been under Japanese control since 1895. The islands came under U.S. control after World War II. When the U.S. returned the islands to Japan in 1972, both Mainland China and Taiwan also laid claim to the islands.

Tension has been growing around the Senkaku Islands, called the Diaoyu Islands by China. The Chinese Defense Ministry announced an Air Defense Identification Zone over international waters in the East China Sea on Nov. 23, which included the islands, and threatened “emergency military measures,” against any who opposed it.

The incident has led to several confrontations, including China sending fighter jets to tail American and Japanese planes, as well as naval confrontations. The formation of the air defense zone followed a similar series of confrontations between China and Japan over the islands.

Europe Shown Getting Nuked in Promotion for China’s Moon Rover