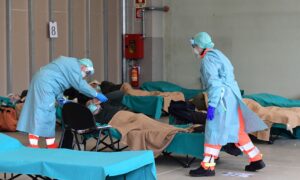 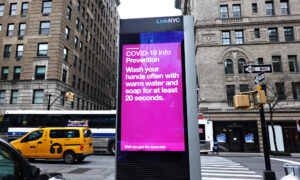 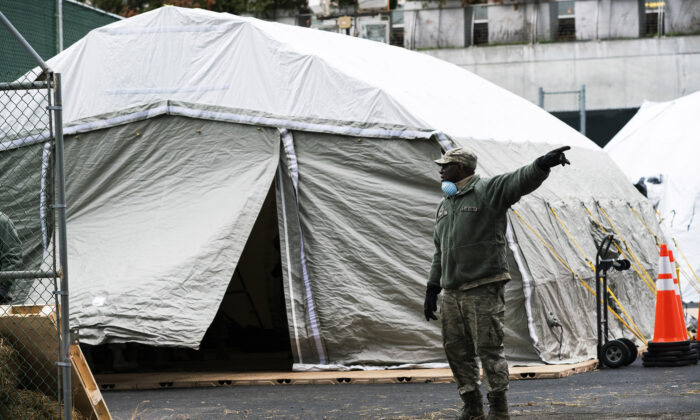 Hundreds of U.S. Army soldiers are deploying to New York to help the state in its response to the CCP virus.

Hundreds of people in the state have died from the illness.

Advance parties are already on the ground, and the main body will set up at the Javits Center in the Manhattan borough of New York City over the weekend, Army Chief of Staff Gen. James McConville told reporters in Washington.

“They will be operational for non-COVID patients beginning Monday,” he said.

The 627th Hospital from Fort Carson, Colorado, is deploying to Seattle. Its advance team was already on the ground. The team was looking at the CenturyLink Field and a state fairground as possible locations but hadn’t finalized a decision.

“Army health care professionals are adequately equipped with first-rate training, equipment, and technology in order to deal with emergent health issues,” Secretary of the Army Ryan McCarthy said in a statement. “Protecting the health of the force and the American people are our top priorities.”

The field hospitals can have as many as 250 beds each and include an array of items, such as operating rooms and an emergency department, which gives them a capacity similar to that of a regular hospital.

The hospitals would probably be sent to New York City and Seattle first, Defense Secretary Mark Esper said earlier in the week, before other areas receive them, because of the surge in cases in both areas.

New York will become the “standard-setter” for how the U.S. Army Corps of Engineers will respond to the CCP virus outbreak, said Lt. Gen. Todd T. Semonite, commanding general of the corps.

Most of the governors are saying their peak of confirmed cases is projected to be “sometime in the middle of April,” Semonite told reporters in Washington. “This is not ‘take all the time in the world’ to do it.”

The process will see local leaders locate available buildings and prioritize the order of conversion before the state leases the buildings and the corps takes over and hires contractors to convert them to hospitals.

More than 10,000 National Guard troops are in communities across the nation, helping distribute meals to people, providing support to testing facilities, transporting health care workers, and performing other tasks, McConville said. In New York City, they helped to build a makeshift morgue outside Bellevue Hospital, with guidance from U.S. Air Force members.

The deployment came after New York City Mayor Bill de Blasio warned residents on March 25 that the situation will likely get worse in April and could devolve further in May.

One of every two New Yorkers could get COVID-19, he told reporters.

“It’s a fair bet to say that half of all New Yorkers, and maybe more than half, will end up contracting this disease,” de Blasio said at a press conference. “And that’s worrisome, very deeply worrisome, for all of us, but we have to start with the truth.”

Oxiris Barbot, the city’s health commissioner, said the number of infected could be even higher.

The city has taken a number of measures to try to stem the spread of the virus, including closing two miles of roads to car traffic during the day; advising people to avoid crowds, stay at least six feet from others, and stay home while sick; and releasing some inmates to try to prevent an outbreak in city jails.