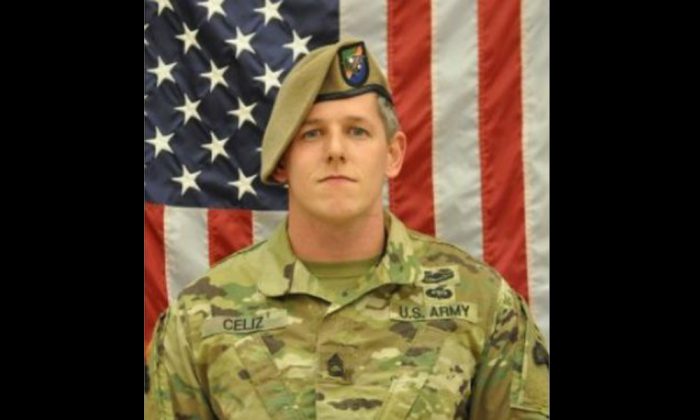 The U.S. Department of Defense on Friday identified the American soldier who was killed in Afghanistan earlier this week as Christopher Andrew Celiz. (US Army)
US News

US Army Ranger Killed in Afghanistan Has Been Identified

The U.S. Department of Defense on Friday identified the American soldier who was killed in Afghanistan earlier this week.

Sgt. 1st Class Christopher Andrew Celiz, 32, from Summerville, South Carolina, died on June 12 from injuries that he sustained from enemy fire in Zurmat district, Paktiya province, according to the Army Special Operations Command on Friday.

He was wounded by enemy fire while “conducting combat operations” in the province, the Army said, adding that he was medically evacuated to the nearest medical treatment facility. There, he was pronounced dead from his wounds.

“The 75th Ranger Regiment suffered a tremendous loss with the passing of Sgt. 1st Class Chris Celiz. The Celiz family has been a critical component of our team and their community in Savannah, Georgia,” stated Col. Brandon Tegtmeier, Commander, 75th Ranger Regiment. “Chris was a national treasure who led his Rangers with passion, competence, and an infectiously positive attitude no matter the situation. He will be greatly missed.”

Celiz was on his fifth combat deployment. He was posthumously awarded the Purple Heart, the Bronze Star, and a Meritorious Service Medal, the Army stated.

Maciel was an infantryman from South Gate, California, the Army said in another statement. “Cpl. Maciel was an excellent soldier beloved by his teammates and dedicated to our mission. He will be greatly missed by the entire Black Lion family. Our prayers are with his family and friends during this difficult time,” Lt. Col. David Conner, Maciel’s battalion commander, stated, according to news website Military.com.

The deaths of Macia and Celiz are the third and fourth combat fatalities in Afghanistan in 2018, respectively.

U.S. Army Col. Scott Jackson, the Security Force Assistance Brigade’s commander in Afghanistan, said that insider attacks were a threat but that American forces are taking the necessary precautions to mitigate them.

“As the commander of this organization, I take all threats seriously, and I assess all threats,” Jackson said in a briefing, according to the Defense Department.