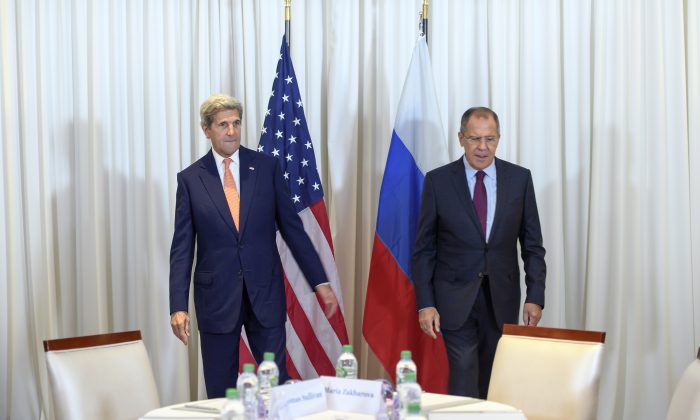 US and Russia strike unprecedented cease-fire
By Chris Massaro

The U.S. and Russia have reached an unprecedented agreement on a cease-fire in the Syrian civil war that will allow humanitarian assistance to reach beleaguered parts of the country and lead to coordinated U.S. and Russian strikes against ISIS and Jabhat Fateh al-Sham.

The ceasefire took effect Monday evening and Tuesday was the first full day of its implementation. So far the ceasefire seems to be holding with only minimal violence.

“There has been a significant drop in the level of violence—not to zero, obviously, and we would like to see an even greater drop in the days to come,” said a State Department official in a briefing.

The US and Russia

Secretary of State John Kerry and his Russian counterpart Sergey Lavrov spearheaded the months long effort to achieve the deal which now hinges on how well it can be enforced.

The hope is that the cease-fire will eventually lead to a political transition in Damascus, but the situation on the ground may dictate otherwise.

“The reality is both the Assad regime and the rebels remain very far apart and polarized on what a transition would look like and what the endgame would be,” said Omar Lamrani, a senior military analyst with Stratfor.

With deeper Russian involvement in the conflict and no clear alternative in a post-Assad Syria, the U.S. has relaxed its position surrounding Assad’s immediate future in the country.

The military and diplomatic offensive has increased the influence of Russia in the region. Russia’s intervention bolstered Assad’s forces and helped the government regain key territory.

“Russia’s stature in the Middle East has risen because of its involvement in the Syrian conflict,” said Lamrani.

“All the regional powers are talking to Russia and recognize Russia as a force with influence in the region,” he added.

Russia also has a strategic advantage by having an airbase in Latakia, Syria from which it can help the Assad regime control the skies over Syria.

There is skepticism within the military about cooperating with Russia with deep mistrust characterizing relations.

Most recently, the U.S. has been resolutely opposed to Russian incursions in Ukraine and the illegal annexation of Crimea.

The U.S. has also opposed Russian support for the Assad government, a regime that has massacred tens of thousands of civilians and has been accused of subjecting its citizens to chemical weapon attacks.

Now the former rivals seem to be edging closer to shared strategic interests, with the U.S. no longer calling for the immediate ousting of Assad and willing to accept him in a transition phase.

All the major opposition groups the State Department communicates with reluctantly agreed to the cease-fire.

The cessation of hostilities requires that all parties to the deal refrain from combat for seven days. The only legitimate targets for anyone in the conflict are ISIS and Jabhat Fateh al-Sham, formerly known as al Nusra Front.

During previous cessation of hostilities, the Syrian regime targeted what it claimed were Jabhat Fateh al-Sham rebels but were actually other opposition groups or civilian targets, according to an administration official in a State Department briefing.

If the ceasefire does hold for seven days, that will allow the U.S. and Russia to establish the Joint Implementation Center (JIS) in order to work together for the first time to take on ISIS, Jabhat Fateh al-Sham and other extremist groups.

If the Assad regime violates the cease-fire, the JIS coordinated U.S. and Russian airstrikes against ISIS and Jabhat Fateh al-Sham will not happen.

This would mark the first time that the U.S. and Russian militaries have coordinated attacks since World War II.

Although the ceasefire has been praised by many who wish to see relief provided to the ailing Syrian population, some believe the effort is highly tenuous and could unravel at any moment.

“Probably the most vulnerable part is that it requires the rebels to disassociate from Jabhat Fateh al-Sham, and they have been unwilling to do so,” said Max Abrahms, assistant professor of political science at Northeastern University.

Many of the moderate rebels have cooperated with Jabhat Fateh al-Sham in the past and the group is diffuse throughout Syria and is integrated in other rebel groups.

Many rebels have fought alongside Jabhat Fateh al-Sham, making it even harder for some groups to fully distance themselves from those they shared combat experiences with.

“This is how I see the ceasefire unravelling,” Abrahms added.

Other rebel groups expressed deep concerns over the cease-fire, citing a lack of monitoring and enforcement mechanisms, sanctions against violators and claiming it empowers the Assad regime to resume indiscriminate attacks on civilians.

“The cease-fire does heavily favor the Assad government and Russia,” said Lamrani.

“America is most concerned with the defeat of ISIS and other Jihadist groups, and the civil war is a distraction to that effort, from a U.S.perspective,” he added.

The United Nations also confirmed that levels of violence significantly decreased in major cities on the first day of full implementation of the cease-fire on Monday.

The break in violence has been a respite for Syrian people who have lived under constant total war during the five-year-old conflict. This is particularly the case in the highly contested city of Aleppo, which has seen some of the most brutal fighting in the war.

“What we hope is that the cease-fire will hold long enough so that humanitarian aid can reach besieged parts of the country,” said Ahmed Benchesmi, Middle East communications director for Human Rights Watch.