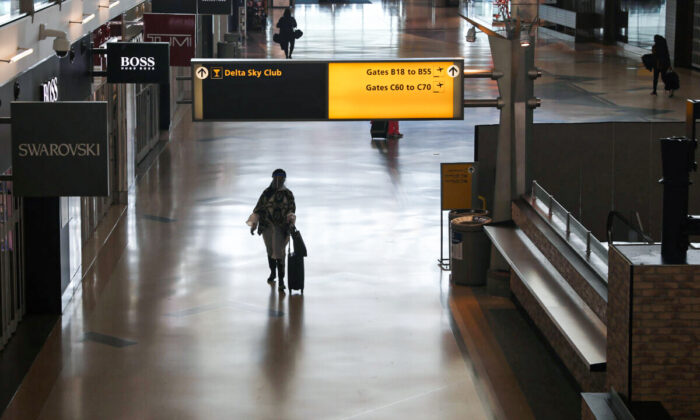 US Airline Stocks Claw Back Losses From Omicron Travel Hit

U.S. travel stocks took an initial hit on Dec 27, but recovered most of the losses on Dec. 28, amid a surge in Omicron cases that is affecting the airline, casino, and cruise industries.

A spike in Omicron cases, staff shortages at airlines, and weather-related problems forced the latest round of massive flight cancellations, leaving travelers stranded across the country during the holiday travel season, which lasts from Dec. 23 to Jan. 2.

This follows the disastrous Christmas weekend, which left the airline industry struggling at its peak profit season with over 3,000 flight cancellations in the United States alone.

The three major U.S. Airlines have been cancelling or delaying hundreds of flights a day at a time when more than 109 million Americans travel long distances to see loved ones.

Over 1,000 flights covering the United States were canceled on Dec. 27 alone, along with 3,300 delays, and with more than 2,600 flights being scrapped worldwide.

Airline stocks were rallying this Fall before Omicron hit, in the expectation of a holiday travel boom after the industry suffered from last year’s pandemic-related restrictions.

Departures from the largest airports in North America are 13 percent below pre-pandemic levels in January 2020, with the United States down 12 percent.

Analysts say that as long as quarantine restrictions over the Omicron variant remain in place, air travel will expect to face long standing staffing shortages. Since its discovery in southern Africa last month, Omicron has proven to be more contagious, but far less virulent than previous variants, with fewer hospitalizations and only a handful of deaths.

Further cancelations are expected this week as airlines struggle to get commuters home, which is likely to cause further volatility in airline stocks.

The suffering cruise line industry is being burdened with new concerns of tougher restrictions after the Centers for Disease Control and Prevention announced on Dec. 27 that it was investigating nearly 70 cases of the Omicron variant aboard cruise ships.

The industry had been ravaged during the pandemic after service was suspended in the United States for about 15 months.

Carnival, the world’s largest cruise operator, said it had isolated a small number of Omicron positive passengers on board one of its Carnival Freedom cruise ships.

All passengers from the cruise trip were disembarked on Dec. 26 following the discovery.

It was further reported over the holiday weekend that “at least four ocean cruise ships were turned away from ports of call” including the Koningsdam, of the Holland America Line, a Carnival subsidiary, which was attempting to dock in Mexico, according to CNN.

Arnold Donald, the CEO of Carnival said to analysts on Dec. 20, that Omicron had led to “a little spike in near-term cancellations but booking patterns are strong.”

The casino resort industry, which has seen a decline in business since the pandemic, saw the shares of major chains like MGM Resorts International down around 1.8 percent from last week.

The hotel and lodging industry took less of a hit, with Airbnb and Hilton Worldwide Holdings recovering after initial losses, while Wyndham Hotels & Resorts and Marriott International had an increase in the value of their stock.