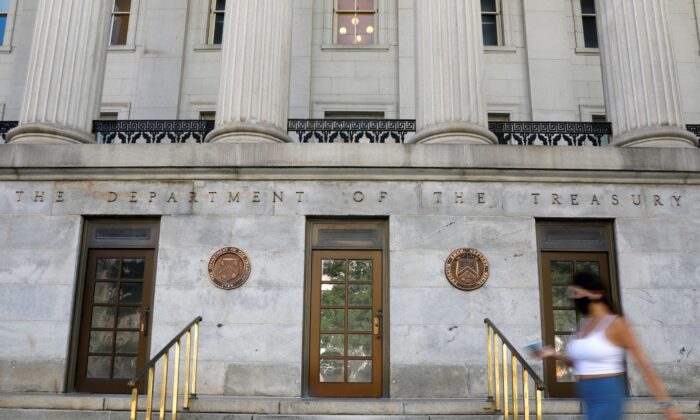 Signage is seen at the United States Department of the Treasury headquarters in Washington on Aug. 29, 2020. (Andrew Kelly/Reuters)
US News

US Adds Dozens of Kremlin-Linked Russians to Sanctions List

Dozens of Kremlin-linked Russian individuals and entities have been added to a sanctions list over what the U.S. Treasury Department described as their “enabling Putin’s war against Ukraine.”

Putin describes the invasion as a “special military operation” to disarm Ukraine’s military and topple its government, a dual objective he’s called “demilitarization and denazification” that he claims is needed to protect Russians living in separatist-controlled parts of eastern Ukraine from “abuse and genocide.”

Ukrainian leaders and their Western allies say that’s all a pretext for Russian territorial expansion and subjugation of Ukraine, which Putin has suggested isn’t worthy of statehood.

The new round of sanctions target three immediate family members of Kremlin spokesperson Dmitry Peskov, Russian tycoon Viktor Vekselberg, and all members of the Management Board of the sanctioned VTB Bank. Also designated are 12 members of the Russian State Duma, the country’s lawmaking assembly.

OFAC is also issuing guidance to guard against the use of virtual currency to evade the sanctions, as well as guidance and authorizations to implement President Joe Biden’s new executive order that imposes new import and export restrictions on Russia.

“Today’s actions also further isolates the severely damaged Russian economy by prohibiting trade in products that are key to the economic and financial interests of all Russian elites,” Yellen said.

Biden’s executive order bans the import from Russia of such items as vodka, caviar, and diamonds while prohibiting the export of luxury goods to Russia from the United States.

Also banned is the supply in any form, be it exportation or sale, of U.S. dollar-denominated banknotes to the government of Russia or any person in Russia.

Russia, for its part, is looking to retaliate with its own sanctions list.

“The lists are ready, we are working on it. This is by and large part of the daily work. They will be made public soon,” Russian Deputy Foreign Minister Sergey Ryabkov said, according to Russian state news agency Tass.

Crippling sanctions imposed on Russia over its military actions in Ukraine threaten to cast the country into its gravest economic crisis since the collapse of the Soviet Union in 1991.