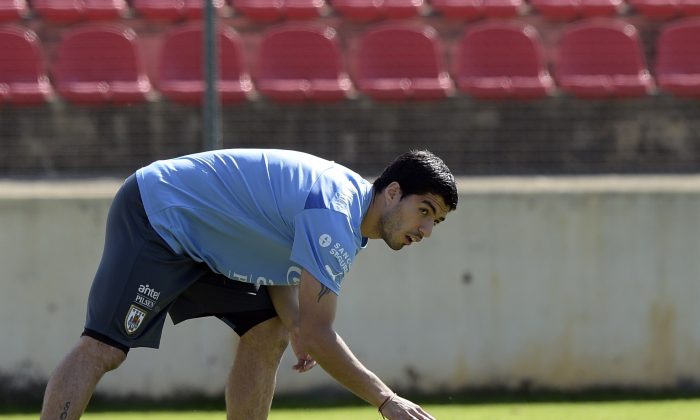 Uruguay's forward Luis Suarez grabs the ball during a training session at Arena do Jacare in Sete Lagoas, Minas Gerais, on June 21, 2014. Uruguay prepares for a Group D match against Italy to be played at the Dunas Arena in Natal on June 24, 2014 during the 2014 FIFA World Cup. (DANIEL GARCIA/AFP/Getty Images)
Social Media

A Facebook post saying Uruguay was “disqualified from [the] World Cup” and England was “saved” is fake.

The post, which falsely claims to be from the BBC, reads: “The uruguay world cup team have been disqualified after horse steroids were found in Luis Suarez’ urine sample (sic).”

There’s not a shred of truth to the post, and when one clicks on it they get a message saying they’ve been tricked.

“Don’t worry, you are not the only one. [Hundreds of thousands] people already fell for this. If you liked the joke, you can share it and trick your friends. Also you can create a joke of your own clicking the button below!” it says.

The website also has a few fake other viral posts, including one saying Luis Suarez of Uruguay and Liverpool FC failed a drug test. Another says Uruguay and England have to play again due to “match fixing.”

BELO HORIZONTE, Brazil (AP) — Upset after seven of his players were subjected to anti-doping testing after a win over Italy, Costa Rica coach Jorge Luis Pinto called on FIFA to devise a more uniform system that won’t generate suspicion.

FIFA normally tests two players at random for post-match testing and Costa Rica’s football federation was furious after five extra players were called in following the team’s 1-0 win over Italy, sending a letter demanding an explanation.

“Many believed FIFA carried out the controls because they saw how the team ran” around the pitch during the win, Pinto said.

The sport’s world governing body said it was simply filling gaps in pre-tournament testing and that it wasn’t singling out Costa Rica. FIFA said it also tested five extra Spain players after the 2010 World Cup champions lost to Chile.

Pinto gave an ironic thanks to FIFA for its explanation and was still disturbed Monday, a day before Costa Rica’s plays England in its final Group D match. The testing came after Costa Rica’s proudest footballing moment, a victory over Italy which ensured it qualified from a group that contains three former world champions. In the first match, Costa Rica beat Uruguay 3-1.

“It wasn’t done tactfully,” Pinto said. “They should be more consistent. I would like to see them ask Brazil for eight players for an anti-doping control.”

Pinto said Costa Rica isn’t opposed to FIFA conducting anti-doping controls, but there should be equilibrium. He said his players are “crystalline” and “pure.”

FIFA said it wouldn’t apologize to Costa Rica, saying it informed the team doctor about the reasons for testing extra players. Some of Costa Rica’s players weren’t available when pre-tournament testing took place.

“We don’t have to excuse ourselves to do our job,” said Michel D’Hooghe, chairman of FIFA’s medical committee.

He said FIFA had to carry out the extra testing on Spain after the Chile match because the team’s players who participated in the Champions League final weren’t present when a medical team did pre-tournament testing.

“We have our duties,” said Jiri Dvorak, FIFA chief medical adviser. “If we do not fulfill them, maybe another speculation would arise.

“We explained to the team physicians and also to the managers what we were doing,” he added. “It’s not really the most pleasant work we have to do.”

Before the tournament, Costa Rica was the outsider in Group D and now the Central American country can finish top if it beats England on Tuesday. While Costa Rica has its fans dreaming of bigger things in the tournament, Pinto is more realistic.